A new international study has revealed how the Komodo dragon can be such an efficient killing machine despite having a wimpy bite and a featherweight skull. 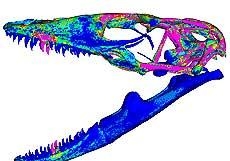 A new international study has revealed how the Komodo dragon can be such an efficient killing machine despite having a wimpy bite and a featherweight skull.

A member of the goanna family with ancestors dating back more than 100 million years, the dragon (Varanus komodoensis) uses a combination of 60 razor-sharp serrated teeth, powerful neck muscles and what researchers are calling a "space-frame" skull to butcher prey with awesome efficiency, the study found.

They note that the dragon - inhabiting the central Indonesian islands of Komodo, Rinca, Flores, Gili Motang and Gili Dasami - shares the feeding and dental characteristics of extinct dinosaurs, sharks and sabre-toothed cats. Scientists Karen Moreno and Stephen Wroe from the University of New South Wales have used a computer-based technique called Finite Element Analysis (FEA) to test the bite force and feeding mechanics of the predator. Their findings are to be published in the latest issue of the Journal of Anatomy.

Normally used in the analysis of trains, planes and cars, the technique allowed the team to "reverse engineer" nature's design to assess the mechanical forces that a Komodo skull can handle. "The Komodo has a featherweight, space-frame skull and bites like a wimp," according to Wroe, "but a combination of very clever engineering, and wickedly sharp teeth, allow it to do serious damage to even buffalo-sized prey.

"The Komodo displays a unique hold and pull-feeding technique," says Dr Wroe. "Its delicate skull differs greatly from most living terrestrial large prey specialists, but it's a precision instrument, beautifully optimised to make the most of its natural cranial and dental properties.

"Unlike most modern predators, Varanus komodoensis applies minimal input from the jaw muscles when killing and butchering prey. But it compensates using a series of actions controlled by its postcranial muscles. A particularly interesting feature of the skull's performance is that it reveals considerably lower overall stress when these additional forces driven by the neck are added to those of the jaw-closing muscles.

"This remarkable reduction in stress in response to additional force is facilitated partly by the shape of the bones, but also by the way bone of different strengths are arranged within the skull."

The Komodo dragon grows to an average length of two to three metres and can weigh up to 70 kilograms. The reptile's unusual size is attributed to island gigantism, since there are no other carnivorous mammals to fill the niche on the islands where they live. As a result of their size, these lizards are apex predators, dominating the ecosystems in which they live. Although Komodo dragons eat mostly carrion, they will also hunt and ambush prey including invertebrates, birds, and mammals.

Its saliva is frequently blood-tinged, because its teeth are almost completely covered by gingival tissue that is naturally lacerated during feeding. Discovered by Western scientists in 1910, the Komodo dragon's large size and fearsome reputation makes it a popular zoo exhibit. In the wild its total population is estimated at 4,000-5,000: its range has contracted due to human activities and it is listed as vulnerable by the IUCN.

The Muhammad Ali of predators