Biomedical pioneer up for NSW Woman of the Year

A trailblazer in biomedical engineering and a role model for aspiring female engineers, Professor Anne Simmons from UNSW is a finalist for the 2012 NSW Premier’s Woman of the Year Award. 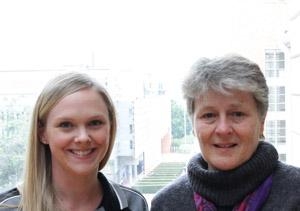 A trailblazer in biomedical engineering and a role model for aspiring female engineers, Professor Anne Simmons from the University of New South Wales is a finalist for the 2012 NSW Premier’s Woman of the Year Award.

“The 1988 Williams Review of engineering education in Australia once described the profession as impoverished in its failure to attract women, and I think this is the perfect way to describe it,” says Simmons, who currently heads the School of Mechanical and Manufacturing Engineering at UNSW.

“Women bring a subtly different view to engineering problems. It shows up in how they conduct their research, interact in teams and design solutions. It’s a very valuable and important aspect and desperately missed when it’s absent,” she says.

At high school Simmons developed a keen interest in physics, chemistry and maths, and a love of building things. And while her teachers politely urged her toward a career in medicine, she opted for the unconventional field of study – at least for girls – of mechanical engineering.

At the time, female role models in engineering were incredibly scarce. In fact, Simmons doesn’t recall a single female lecturer in engineering during her entire undergraduate degree at the University of Queensland during the late 1970s, and only one other female classmate in her year.

But Simmons wasn’t discouraged and soon discovered the rapidly emerging field of biomedical engineering, which was taking shape in Australia at UNSW, where she later completed both her Masters and PhD.

At UNSW, she applied her love of engineering and her interest in medical sciences towards designing innovative solutions for healthcare.  This began in the early 1980s when she was involved in the Centre’s pioneering work in haemodialysis systems that remove waste from the blood when patients experience kidney failure – in essence, an artificial kidney, says Simmons.

“The human body is astounding. Trying to fix any one part is really only a temporary solution to a system, that in many ways, is often impossible to replicate,” she says. “But it’s always interesting to look at problems relating to health, and very rewarding to be able to help people.”

Simmons’ research has ranged from improving prosthetic limbs for amputees, to optimising the design of coronary stents to improve blood flow through clogged arteries, to developing drug delivery systems with improved therapeutic outcomes for patients with diseases such as cancer.

In her career, she has also been closely involved in other medical device developments including implantable defibrillators and the promising new bionic eye.

In 2006, Simmons was appointed head of the Graduate School of Biomedical Engineering at UNSW, and by the time she left in 2011, the proportion of female students was about 40 per cent.

In her new role as the head of School of Mechanical and Manufacturing Engineering, Simmons continues to be a role model to both students and staff alike.

“Anne brings a unique blend of time in both industry and academia to her research, and as such, is able to see the utility of her work and its application to the well being of future patients,” says Professor Graham Davies, Dean of the UNSW Faculty of Engineering.

“She has the determination and sense of humour to make things happen, and is the perfect role model for young female engineers who want to make a difference in their careers to the quality of life of the Australian public,” says Davies.

Simmons is one of four finalists from more than 200 nominations. NSW Premier Barry O’Farrell will announce the winner at a reception on 30 May.