Indigenous collaboration and bush skills are shedding new light on what killed off Australia's unique megafauna. 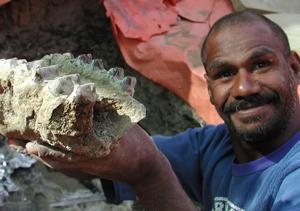 As sabre tooth tigers and woolly mammoths were wandering around Europe, unique, giant prehistoric animals were living in Australia – three metre tall kangaroos and wombat-like creatures, the size of a four-wheel drive, were just some of the curious creatures Down Under. Yet mysteriously, sometime during the last 100,000 years, they disappeared forever.

The extinction of these giant animals, known as megafauna, has generated great debate. Were they hunted to extinction by a “human blitzkrieg” by the first Australians? Or was climatic instability to blame?

A lack of fossil records adds to the difficulty in settling the debate. Over the past 20 years a team of researchers including indigenous collaborators has been excavating at  Cuddie Springs, an ancient lake near Brewarrina in north-western New South Wales, to try to unravel the relationship between stone tools and the fossil bones, and in turn answer questions about the fate of Australia's megafauna.