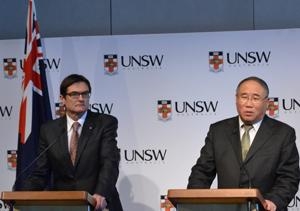 China has laid out an ambitious road map to reduce emissions by 40-45 per cent by 2020, including the world’s largest national carbon trading scheme, at a high level bi-lateral conference at the University of New South Wales.

Speaking at the Australia-China Climate Change Forum today, China’s most senior official with responsibility for climate change, Vice-Chairman Xie Zhenhua, challenged the “misunderstanding” that China -- the world’s biggest polluter and second largest economy -- was failing to act on emissions.

He detailed plans for seven pilot carbon trading schemes to be operating in urban and provincial areas before the end of this year, the decommissioning of scores of “dirty” outdated industrial plants and coal-fired power stations and significant investments in non-fossil fuel energy sources, including nuclear, wind and solar power.

Vice-Chairman Xie held bi-lateral talks at UNSW with his Australian counterpart, Minister for Climate Change, Industry and Innovation, Greg Combet, before telling the conference that China had much to learn from Australia’s experience in implementing a carbon trading scheme.

Minister Combet highlighted the benefits to date of Australia’s carbon price, including an 8.6 per cent drop in demand for electricity in the first six months of operation and increased investment in renewable energy. He foreshadowed an influential Asia-Pacific emissions trading market as China’s scheme came on line, with potential links to Australia, New Zealand, California and parts of Japan and South Korea.

“Australia has been working very closely with China on the development of its pilot and national emissions trading schemes over the past two years,” Mr Combet said.

“China’s national carbon market plans, which Vice Chairman Xie outlined this morning, are comprehensive and will be a very important development for the global carbon market. Once up and running, it will be the largest emissions trading scheme in the world.”

UNSW’s Centre for Energy and Environmental Markets will work with Chinese researchers in several of the seven regions identified for pilot carbon trading markets, including Beijing and Shanghai, to study the design, implementation and operation of the pilot schemes plus other key issues for successful emissions reductions.

“China is now poised to become one of the world’s largest jurisdictions with carbon pricing in place. Successful development of a national scheme from their seven pilots can play a vital role in China’s, and hence the world’s, efforts to slow global warming and its impacts,” said the Centre's Joint Director, Associate Professor Iain McGill.

Earlier, a senior official from China’s Department of Climate Change, Dr Jiang Zhaoli, told the conference China would face a “horrific” future with unimaginable consequences for its people and its natural environment if it did not act decisively now to curb pollution.