The Commonwealth Bank has committed $5 million to help UNSW researchers in their world-leading push to build a silicon-based quantum computer. 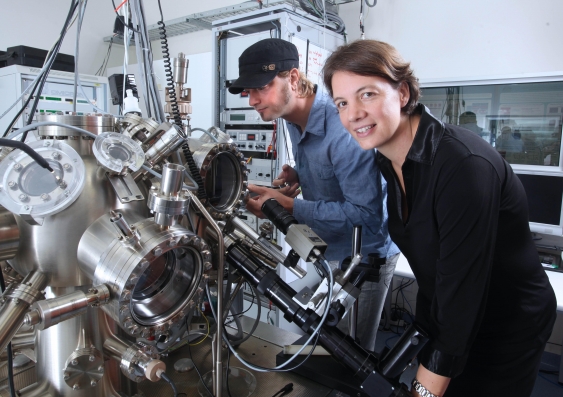 Commonwealth Bank of Australia has committed $5 million in funding to help Australian-based researchers in their quest to build a silicon-based quantum computer.

As part of the agreement, Commonwealth Bank will provide $5 million over five years to the ARC Centre for Quantum Computation and Communication Technology, based at UNSW. The funds will assist the Centre to buy and maintain the necessary equipment, and conduct experiments for research and development.

The Centre for Quantum Computation and Communication Technology is led by UNSW Scientia Professor and Laureate Fellow Michelle Simmons, who leads a team of more than 170 researchers in six affiliated universities working across both optical and silicon quantum computing and secure communications. In 2014, Michelle was elected into the elite American Academy of Arts and Science for her work in atomic electronics and quantum computing.

“Australia is a powerhouse in quantum information research. Under the Australian Research Council Centre of Excellence scheme we have built a global leadership position in quantum computing and demonstrated our ability to engineer and control information on individual atoms. We are delighted to be working with Australia’s visionary bank,” Professor Simmons said.

Mr David Whiteing, Chief Information Officer at Commonwealth Bank said CBA, known affectionately as the technology bank, is a strong supporter of innovation in Australia and is proud to support the Centre’s research efforts.

“The Centre is at the forefront of a global scientific race to build the first silicon based quantum computer. This race is akin to the space race half a century ago where countries wanted to be the first to fly to the moon – and in this modern race we want Australia to get there first.

“Commonwealth Bank has a long history supporting Australian people and communities, and a silicon based quantum computer which brings a wealth of benefits to Australians and the world aligns tightly to our vision. The speed of quantum computing means it promises to solve real world issues such as searching large databases, solving complicated sets of equations, and modelling atomic systems such as biological molecules and drugs. This means they’ll be enormously useful for healthcare industries, government, finance industries and security,” Mr Whiteing said.

Commonwealth Bank’s investment will assist two three-year projects: firstly to demonstrate entanglement in a scalable silicon based quantum computing architecture and then to coherently transport quantum information to create “flying qubits” within the computer. The work will be conducted by Professor Simmons together with her colleagues Scientia Professor Andrew Dzurak, Professor Sven Rogge and Associate Professor Andrea Morello. Already these projects have resulted in ground breaking research for qubit coherence times (the time available for processing) holding the world-record for a solid state system.

The Centre for Quantum Computation and Communication Technology is a global leader in the engineering and control of individual atoms in silicon and associated manipulation of quantum states. It is working with the support of Commonwealth Bank to build a quantum computer prototype in silicon, the material of choice in the semiconductor industry.

Researchers design architecture for a quantum computer in silicon