A new form of bushfire behaviour has been identified by a team of researchers from UNSW Canberra and ACT emergency services. 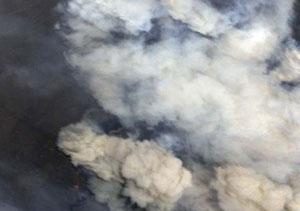 A new form of bushfire behaviour, which can have a potentially catastrophic effect on the development of fires burning in rugged terrain, has been identified by a team of researchers from UNSW Canberra, the ACT Emergency Services Agency and ACT Territory and Municipal Services.

This fundamental scientific breakthrough introduces the important phenomenon - “fire channelling” - and its implications for bushfire suppression and management. Importantly, the research findings raise questions about the effectiveness of established mitigation practices, including fuel reduction burning and vegetation removal around houses.

The research was based on data collected during the January 2003 alpine fires in the ACT and NSW, combined with data collected by the researchers as part of the Bushfire Cooperative Research Centre’s HighFire Risk Project.

The research team found that intense fire spread could occur at right angles to the direction a fire would be expected to spread, with numerous spot fires then carrying the fire down-wind.  This fire spread was at odds with known forms of bushfire behaviour and was found to occur exclusively on steep slopes that face away from the wind (known as “lee-facing slopes”), where fire behaviour would normally be milder.

“The overall result is the formation of extensive regions of active flaming, which can then trigger the formation of a firestorm,” said Dr Jason Sharples from UNSW Canberra. “This provides a new understanding of what happened during the Canberra bushfires in January 2003.

“During the 2003 fires it was simply not known that a fire could behave in such a way,” said Mr Rick McRae from the ACT Emergency Services Agency, a co-author of the research. “As such it is important to recognise that improving the advice provided to the community during extreme bushfire events may require a protracted wait while the science progresses.”

“One of the likely consequences of the unusual fire behaviour is the mass production of embers, such as was seen on Black Saturday. The ember storm that impacted Canberra suburbs in January 2003 is another case in point.  It is important to now re-evaluate the way that fuel reduction burning is applied in order to minimise ember production,” said Dr Sharples.

“The phenomenon is not unique to Australia. Indeed, there have been a number of wildfires around the globe in which ‘fire channelling’ is likely to have played a part and we are now working with a number of international collaborations. With the prospect of more frequent extreme bushfires due to the effects of climate change, it is important that bushfire management agencies learn about unusual effects like ‘fire channelling’,” he said.

To help prevent fire-fighters being injured or killed, the research team is now working on incorporating the research findings into the national bushfire training curriculum.

“Another outcome of the research is demonstrating the importance of carefully observing wildfires, including the use of sophisticated remote sensing technology. A lot of the science coming from recent wildfires would not have happened unless fire agencies and others put these systems in place in the lead-up to the fire season,” said Mr McRae.

The research has been published in the International Journal of Wildland Fire.