UNSW researchers have claimed an unprecedented six awards in the 2008 Eureka Prizes, the strongest showing by any institution in the 19-year history of the awards. 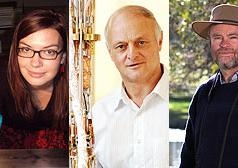 University of New South Wales researchers have dominated the 2008 Australian Museum Eureka Prizes, winning an unprecedented six awards for their achievements in water, climate and renewable energy research and their leadership in Australian science and engineering.

UNSW delivered a powerful result In the prestigious awards, known as "the Oscars of Australian science", with the six awards far outstripping the next-best result of two awards going to the University of Sydney. The UNSW tally is the highest by any institution in the 19-year history of the Eureka Prizes.

Professor Robert Clark, a Federation Fellow and Director of UNSW's Centre for Quantum Computer Technology, was awarded the CSIRO Eureka Prize for Leadership in Science for his pioneering research in the field of quantum computing. Hailed as "a pivotal figure and visionary" in his field, Professor Clark is leading research which promises to fundamentally change computing science. Former Australian Chief Scientist Dr Robin Batterham paid tribute to Professor Clark, saying: "He has made a catalytic effort which will do nothing less than revolutionise our existence."

In a major achievement, the entire UNSW School of Photovoltaic and Renewable Energy Engineering took out the IAG Eureka Prize for Innovative Solutions to Climate Change for its groundbreaking and consistently strong record in solar cell research.

Environmental scientist Professor Richard Kingsford, from UNSW's School of Biological, Earth and Environmental Sciences, received the Australian Government Eureka Prize for Promoting Understanding of Science. Professor Kingsford has played a major role in lifting awareness of the health of, and threats to, Australia's major rivers and wetland systems.

Winners of the awards were announced at a gala dinner held at Sydney's Royal Randwick Racecourse on August 19.