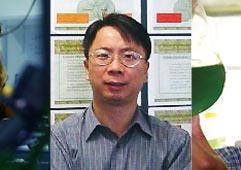 The naming of Professors Brett Neilan, Michelle Simmons and Aibing Yu has seen UNSW receive more Federation Fellowships than any other Australian research institution. The trio are among 14 outstanding academics, selected from a highly competitive field of candidates, who will share $23m over the next five years to advance Australian research and innovation. The ARC Federation Fellowships scheme supports excellence in research by attracting world-class research leaders to key positions in Australia.

"Under this Fellowship, Professor Neilan plans to fully characterise the genetic and biochemical basis of toxin biosynthesis and its regulation in cyanobacteria. This research will provide new understanding of both the factors that affect drinking water quality and the future of novel pharmaceuticals, including antibiotics, anaesthetics and immunosuppressants."

Professor Michelle Simmons, receiving her second Federation Fellowship, is Director and Program Manager of the Atomic Fabrication Facility at UNSW and ARC Centre of Excellence for Quantum Computer Technology. With the enormous economic pressure to produce ever smaller and faster transistors, the semiconductor industry is committed to pushing silicon technology to its limits.

"Under her first Federation Fellowship, Professor Simmons has already demonstrated a radical new fabrication strategy of commercially-based silicon transistors at the atomic scale," Professor Field said. "Creating an international hub for atomic-scale electronics in Australia, she now plans to address fundamental impediments to transistor scaling, which are of vital strategic importance for the global semiconductor industry."