UNSW Canberra research suggests that 'wild’ fires like those that devastated the Warrumbungles are neither unexpected nor unpredictable, with implications for the way emergency personnel should respond. 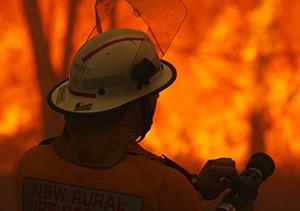 Unusual fire behaviour is not just caused by a fleeting wind, but a physical process that is repeating. Photo: Fairfax

The smoke plume from January’s devastating bushfire in the Warrumbungle National Park in western NSW billowed an estimated 12 kilometres into the atmosphere – higher than 27 Empire State Buildings.

Almost 10 years to the day since the 2003 Canberra bushfires, the blaze came as communities across south-eastern Australia saw fire risk conditions elevated to ‘catastrophic’. Roughly 54,000 hectares of forest and park infrastructure were burnt out, 53 homes destroyed and more than 1000 livestock killed.

“There was just absolutely no stopping that fire,” NSW Rural Fire Services (RFS) deputy commissioner Rob Rogers told The Australian newspaper. A wind shift at the worst possible time had created “perfect storm” conditions for a fire that followed none of the expected trajectories.

Research, however, suggests blazes like the one in the Warrumbungles may be neither unexpected nor unpredictable.

“It is not just a fleeting wind causing this unusual [fire] behaviour, but a physical process that is repeating,” says Dr Jason Sharples, a mathematical scientist at UNSW Canberra who is also a volunteer firefighter with the ACT RFS.

Read the full story in the latest Uniken.

Read Uniken on the go. Download the new Uniken app, and be in the running to win a tablet computer.