Engineering student Jiefei Wang spent four weeks in India, helping to provide solar power to the urban poor. He documented his work in a photo essay. 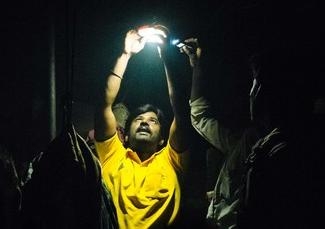 But a not-for-profit organisation co-founded by former UNSW students is using the technology on a much smaller scale – to bring light to some of the one-in-four people in India who live without electricity.

Across India, an urban boom is underway, prompting hundreds of thousands of people to search for work in cities, where many end up living in tent slums.

These residents rely on candles, kerosene lamps and fires for light, cooking and warmth, but this is expensive, unreliable and unhealthy. The World Health Organisation estimates kerosene gas lamps kill more than 1.5 million people each year.

A tent slum in Bangalore.

Thankfully, there is another solution. Jiefei Wang, who is in the final year of a double degree Bachelor of Renewable Energy Engineering/Bachelor of Commerce, has just spent four weeks lighting up the slum villages of Bangalore with solar power.

His work was part of an engineering student fellowship with Pollinate Energy, a not-for-profit social business that aims to improve the lives of India’s urban poor by providing them with solar lamps and smoke-free cook stoves, sold and installed by locals.

Two of its co-founders were UNSW graduates, Ben Merven and Monique Alfris, who studied renewable energy engineering before using their skills to set up Pollinate Energy just over a year ago.

For him it was an eye opening experience about the way his engineering degree can be used, and about how different cultures live around the world.

“It was definitely a challenging experience, but it was one of the most rewarding things I’ve ever done,” he says.

While in Bangalore he worked with the organisation’s “pollinators”, local Indians who are trained by Pollinate Energy to sell solar lamps to communities. The cost of these lamps is earned back in a few weeks as the purchasers no longer have to buy expensive kerosene gas or firewood, and by using local salespeople, the business goes beyond being a charity and becomes a sustainable way of supporting the population.

"We’d train our pollinators on the benefits of the lamps and teach them not to just go straight in with the sales pitch,” says Jiefei. “They’re not just sales people but are actually helping disadvantaged families, and reminding them helps get the message of the health and cost benefits out to more communities.”

“Some communities were a bit hostile and didn’t want to talk to us because we were outsiders, but others were really welcoming or had already heard about the product form their neighbours and wanted to try it out. It was different every day,” he says.

By the end of the four weeks, his pollinator was so experienced that Jiefei was able to spend much of his time talking to the local community and playing with the children. “I even managed to pick up some of the local dialect, although they laughed at my accent,” he adds.

Another project he worked on before he left was helping to design and build temporary houses created from a recycled material that’s more secure than tents, but still affordable.

“After we left they tested our structures,” says Jiefei. “As expected, the houses were drier, more secure and provided more space for the inhabitants than tents. But one thing we didn’t expect was that having that extra space gave the children more room to study, and being waterproof meant that their textbooks would be dry, so it actually allowed children to go to school who previously couldn’t,” he says.

“Another girl whose family had installed the solar lamp told me she was going to use the light to read more,” he adds. “Those successes were so rewarding.”

Although he improved his engineering skills, Jiefei says in the end he learnt the most about working in a team and communication – valuable skills for his resume. “We were working with people from all over the world, meeting new people every day, learning different languages, training, motivating and managing people.”

He hopes his new skills will help him get a job at the end of his degree – potentially one that involves giving something back to the community.

“I learnt a lot on the trip and am now more passionate about using engineering to help people,” he says. “There’s amazing potential.”