Physclips, a set of multimedia learning and teaching materials developed for introductory physics, has won the Physics division of the 2007 Pirelli Prizes for Science Communication. 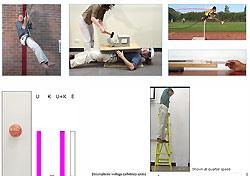 Physclips, a set of multimedia learning and teaching materials developed for introductory physics, has won the Physics division of the 2007 Pirelli Prizes for Science Communication.

Funded by the Australian Learning and Teaching Council (ALTC), Physclips was developed by George Hatsidimitris and Joe Wolfe of the UNSW School of Physics in Sydney, Australia,

The prizes, each valued at 15,000 euros, are part of the company's campaign to promote broader understanding of science.

Physclips is a set of learning and teaching resources for introductory physics, currently mainly mechanics. A series of multimedia tutorials give brief overviews, using film clips and animations. Hyperlinks take the user to broader and deeper treatments. For the benefit of teachers, the individual elements are available for download.

"It doesn't aim to replace a class or a textbook" says Professor Wolfe. "It's something that could only work in multimedia, with features such as animated diagrams superimposed on slow motion video."

ALTC Chief Executive, Professor Richard Johnstone said Physclips is an example of an innovative teaching approach that is enriching the student experience.

"The Physclips site has generated great interest judging by the number of regular visitors," Professor Johnstone said. "My congratulations to the developers for taking this successful project into the international arena."

Physclips receives about 1,500 unique visitors a day, with each visitor downloading typically 30 files. Overall, there are typically 40,000 hits a day.

The 2007 Pirelli Prizes for Science Communication are part of the Pirelli International Award - the world's first and most prestigious internet multimedia award aimed at the diffusion of scientific and technological culture worldwide.

Joe Wolfe is a professor of physics who has won a number of awards and medals for both his research and his teaching.

George Hatsidimitris is an educational multimedia developer in the School of Physics.