The first solid evidence of a new class of medium-sized black holes has been discovered in a distant galaxy by an international team of astronomers. 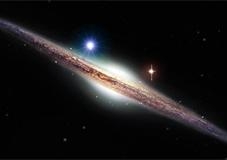 The first solid evidence of a new class of medium-sized black holes has been discovered in a distant galaxy by an international team of astronomers.

The black hole is more than 500 times the mass of the Sun, the researchers report in the journal Nature.

Until now, identified black holes have been either super-massive (several million to several billion times the mass of the Sun) in the centre of galaxies, or about the size of a typical star (between three and 20 Solar masses).

A black hole is an object with such a powerful gravitational field that it absorbs all the light that passes near it and reflects nothing.

"While it is widely accepted that stellar mass black holes are created during the death throes of massive stars, it is still unknown how super-massive black holes are formed," says a member of the team, Dr Sean Farrell, who recently completed his PhD studies at the Australian Defence Force Academy (UNSW@ADFA) and now works at the University of Leicester, UK.

"The identification of HLX-1 is therefore an important step towards a better understanding of the formation of the super-massive black holes that exist at the centre of the Milky Way and other galaxies," Dr Farrell said.

The Milky Way is not low-fat: new study reveals facts about grease in space