A UNSW-led team of researchers has developed a new class of biosensor that can detect exceptionally small traces of contaminants in liquids. 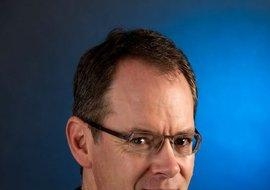 A whole new class of biosensor that can detect exceptionally small traces of contaminants in liquids in just 40 minutes has been developed by a UNSW-led team of researchers.

Known as a biochemiresistor, it meets a long-standing challenge to create a sensor that is not only super-sensitive to the presence of chemical compounds but responds quickly. It has countless potential uses for detecting drugs, toxins and pesticides for biomedical or environmental analysis.

In a paper published in the prestigious chemistry journal Angewandte Chemie the researchers describe how they successfully tested the new sensor by detecting tiny traces in milk of the veterinary antibiotic enrofloxacin. The journal has singled out the study for attention as a “Very Important Paper”. Only 5% of papers published by the journal are so designated.

“Enrofloxacin is an antibiotic used in the agricultural industry that can be transferred to the food chain,” notes co-author Scientia Professor Justin Gooding, of the UNSW School of Chemistry and the Australian Centre for Nanomedicine.

“Our biochemiresistor was able to detect enrofloxacin in neat milk in 40 minutes, at level as low as one nanogram in a litre of milk. To put that number in perspective, a nanogram is a billionth of a gram and is the mass of a single cell.

“While that is impressive enough, the sensor is a general concept that can be widely applied across many different fields.”

A biosensor is a portable analytical device that uses biological molecules to detect selectively just one compound within a mix of many others. Small biosensors are already in daily use testing the safety of drinking water, for checking diabetic blood-sugar levels and for pregnancy tests

The biochemiresistor uses gold-coated magnetic nanoparticles modified with antibodies that are selective for the chemical constituent – or analyte - of interest. The nanoparticles are dispersed into the sample for analysis and if the analyte is present some of the antibodies detach from the nanoparticles.

“This new type of biosensor is rapid in response because the magnetic nanoparticle biosensors go and get the analyte rather than the usual approach of waiting for the analyte to find the sensing surface,” says Gooding.

“The biochemiresistor is also more sensitive than the usual biosensor because, as the nanoparticles are dispersed throughout the sample, the entire sample is analysed, not just a small portion of the solution.”

The study’s lead author is Leo M.H. Lai. The team included other researchers from the Australian Centre for NanoMedicine and the former ARC Centre of Excellence for Functional Nanomaterials at UNSW.