UNSW has hosted its inaugural Postdoctoral Academy Awards for researchers in Medicine, Science and Engineering whose names don’t often get up in lights. 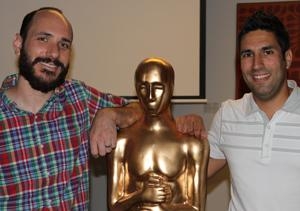 If it’s good enough for movie stars, why not for university researchers?

UNSW has hosted its inaugural Postdoctoral Academy Awards for early career researchers in Medicine, Science and Engineering whose names don’t often get up in lights.

The red carpet event, complete with giant statues of gold-plated Oscar on the stage, was hosted by the Faculties at UNSW’s Lowy Cancer Research Centre.

The top prizes were awarded to the postdocs with the best publication results.

The prize for Science went to Dr Julian Berengut who was part of the UNSW team that won a Eureka award this year for the landmark research that found the laws of physics might vary across the cosmos.

Dr Jason Grebely nabbed the top honour for Medicine. He is a Senior Lecturer in the Viral Hepatitis Clinical Program at the Kirby Institute for Infection and Immunity in Society and his research interests include epidemiology, natural history and therapeutic strategies for hepatitis C infection in people who use drugs.

Dr Yun Hau Ng was recognised for his publication record in Engineering. Working in the ARC Centre of Excellence for Functional Nanomaterials, his current research interests are in the development of hybrid inorganic-organic nanostructures for solar energy conversion.

Several prizes were given to more senior academic staff that supported the young researchers.

The Academy was established two years ago by the Faculties of Medicine, Science and Engineering to support their postdocs’ careers through seminars and mentoring.