A painting featuring pioneering UNSW solar cell researcher Martin Green is in contention for one of Australia's biggest art prizes. 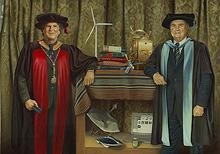 Scientia Professor Martin Green's pioneering solar cell research has earned him some of the world's most important prizes in science and engineering. Now he - or at least his image - is in the running to win one of Australia's biggest art prizes.

The imposing double portrait featuring the country's leading solar scientist alongside the author of the influential Garnaut Climate Change Review is called The alternative ambassadors, in recognition of a 16th century artwork, The Ambassadors by Hans Holbein, which Mr Alexander used as his inspiration.

Mr Alexander is the husband of Dr Anna Bruce, of the School of Photovoltaic and Renewable Energy Engineering, and decided Professor Green was an ideal subject for his debut Archibald entry.

"Obviously, being married to Anna I'm pretty aware of the climate change debate - she's a very passionate advocate of climate science," Mr Alexander said after his painting became one of 34 finalists selected from nearly 900 submitted works.

"I had met Martin a few times before - he's such an outstanding figure in the solar community."

Mr Alexander said he had wanted to avoid using a celebrity as his subject.

"There are far more interesting people out there as far as I'm concerned - I feel that the sciences are the most creative realm of humanity now."

Professor Green, who has not met Professor Garnaut as the sittings were carried out separately in Sydney and Melbourne, said he was impressed with the artwork.

"I thought it was a commanding type of painting and it had a bit of presence," he said.

The winner of the Archibald Prize will be announced on March 26.