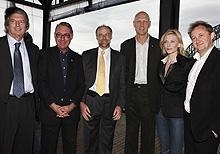 The array will comprise 2,000 high-efficiency Pluto solar photovoltaic panels and will supply up to 70 per cent of the STC's power requirements, cutting its carbon emissions by about 555 tonnes a year - the equivalent of taking 158 cars off the road.

Suntech CEO and UNSW alumnus Dr Zhengrong Shi and his wife, Vivienne, made an extraordinary $2 million donation from their family charitable foundation to create the solar array, which will be part of the STC's broader Greening the Wharf sustainability project.

The Federal Government has provided $1.2 million for the project to support major energy efficiency and water saving measures.

The launch was also attended by Mrs Vivienne Shi, UNSW Chancellor David Gonski, and Scientia Professor Martin Green and Dr Richard Corkish from the School of Photovoltaic and Renewable Engineering.

Ms Blanchett and Mr Upton said the project positioned the Wharf to become the first "green" arts precinct in the world.

"Climate change is the most pressing challenge facing the human race today," the directors said in a statement.

"One of the roles of art is to imagine the future. To do this effectively it must be both visionary and practical. We believe Greening The Wharf not only delivers enormous practical outcomes for Sydney Theatre Company but offers a vision of how we might all creatively embrace the challenge and opportunities that climate change presents."

Mr Gonski said: "I am delighted that UNSW is part of this exciting project and I congratulate the Sydney Theatre Company on a wonderful initiative."

"It is not only a great example of corporate leadership - it is also means that world-leading solar cell technology, jointly developed by UNSW and Suntech Power, is showcased in the heart of Sydney," Mr Gonski said.

"I want to particularly acknowledge Dr Zhengrong Shi, and his wife Vivienne, who
have been so generous in their support - a demonstration of their commitment to a sustainable future and the importance of the Greening The Wharf initiative."

Dr Shi said it was a pleasure to support the sustainability efforts of one of Sydney's cultural centerpieces.

"I hope that this project increases the awareness of climate change and demonstrates the huge role that solar can play in mitigating carbon emissions in Australia today," he said.

The Pluto cell used in the panels is a low-cost implementation of UNSW's world record-holding 25 per cent efficiency PERL solar cell technology. Jointly developed by Suntech and UNSW's School of Photovoltaic and Renewable Energy Engineering, the technology's use at the STC is its first major installation in Australia.

Work on the installation is expected to be completed by 2010.