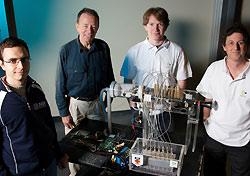 Developed by a team of engineers and scientists from NICTA and the University of New South Wales, the Australian entry, which performed The Flight of the Bumblebee and Bolero in the final, beat a Dutch developed guitar-picking robot and a Finnish piano-playing machine.

Staged in Athens, the goal of the Artemis Music Orchestra competition is to raise awareness about the growing capacity and applications of embedded computer systems.

An embedded system is a special-purpose computer system that usually performs specific dedicated functions, as distinct from a personal computer, which can be programmed to do many different tasks. Digital watches, MP3 players and traffic lights are examples of everyday objects that include embedded systems.

Dr Judge describes the robot as "an embedded computer system connected via specially constructed electronics to actuators that control the keys and mouthpiece of the clarinet."

The fine-tuning required to control the reed and air pressure flowing through the clarinet was achieved through collaboration with Joe Wolfe of UNSW's Music Acoustics Laboratory.

"As any human clarinettist will tell you, avoiding squeaks is an important challenge," says Prof Wolfe "To play over a large pitch range, softly or loudly, the robot had to know how to control air pressure and the force and damping on the reed."

Researchers at the Music Acoustics Lab will use the robotic clarinet to better understand the gestures of human players. "It was a big rush to get a robot to play in time for the competition" says Prof Wolfe, "and we didn't have time to include a lot of what we know from research on human players. This instrument was a beginner with fast fingers. Next year's model will be a much better musician: we'll teach it, and it will teach us about the details of musicianship, too."

Are instrument playing robots likely to replace human musicians? "Definitely not," says Prof Wolfe. "Who would go to a robot concert? For us, the robot is a complementary part of our research into how to play music badly or well, and what makes the difference."

Watch the robotic clarinet in action