Opinion Rubbish has recyclable beauty within

Sourcing raw materials from waste can cut costs, which means we need to look at our rubbish for its "beauty within," writes Veena Sahajwalla. 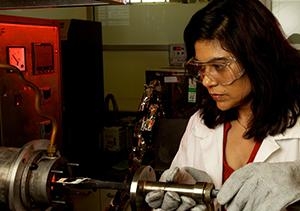 OPINION: As a materials engineer I find waste very attractive. Whether it's used tyres, plastics, food or agricultural residue -- or even what's left after your old car has been stripped of its useful parts and scrap metal -- I'm always looking for "the beauty within".

We currently source much of the carbon we use in metals processing, for example, from non-renewable fossil fuels like coke, when our ever-increasing mountains of garbage offer us plenty of carbon, plus a range of other potentially useful elements.

By thinking outside the square, and carefully recalibrating some important industrial processes, we can convert waste back into raw materials for production. In steelmaking we have already shown that by adding an optimised blend of granulated waste tyres and plastics to electric arc furnaces we can efficiently "react" the waste at high temperatures during steel production. A bonus is that the waste blend improves furnace efficiency so also reduces electricity usage.

But, that's really only the beginning. It turns out that it's not just certain plastics and used tyres which can be transformed through high-temperature chemical reactions. Our research is revealing that many other waste materials, from palm shells to Bakelite, can be transformed efficiently and cleanly at high temperatures. In fact, in our recent experiment mixes of coke and various wastes performed better than coke alone.

Waste, however, is often complex and so hard to break down into distinct separate materials that can be neatly recycled back into their original form; think, for example about all the different plastics and glass left after a car has been stripped. And, while lots of things we throw away are plastic, they are often complex mixtures of plastics. A PET drink bottle can be easily recycled back into more, useful PET, but a plastics mix, like automotive waste, currently ends up in landfill.

Instead, we could add a fourth "R" -- re-form -- to the mantra of "reduce, reuse, recycle". To achieve this, we need to start looking at our rubbish for its "beauty within": what useful elements might be recovered and re-formed into raw materials for production if we could create opportunities for waste to be integrated into key industrial processes?

Our research shows that the carbon and silica in automotive waste, along with some metal also left over after stripping, can, for example, be successfully "re-formed" to create metal alloys. Instead of being constantly derided as part of the environmental problem, industry could lead a revolution in recycling. And, by sourcing a proportion of raw materials from waste, both the cost of industrial production and the impact of that production on the environment can be reduced, which is an unequivocal "win, win".

The incentives are firmly in place. On the one hand the cost of virgin raw materials continues to rise, as does the cost of transport, while on the sales side pressures for competitive pricing are only intensifying. Meanwhile, waste stockpiles are accumulating at an alarming rate. Australians threw away 1.4 million tonnes of plastic in 2010-11, for example, of which just over 20 per cent was recycled. And, of the roughly 20 million tyres discarded a year in Australia only 23 per cent are recycled, 64 per cent go to landfill and the remainder are dumped illegally. In some states, tyres are now banned from landfill sites due to their potential toxicity. Then there are mountains of food processing and agricultural waste like lignin, the carbon-bearing "woody" waste left behind after processing, which if put to better use could also reduce demand for virgin raw materials.

And, for those industries, businesses and public entities that have to dispose of waste, gate fees at landfill sites are rising sharply.

Why not, then, seek to "mine" our waste stockpiles to source secondary raw materials for industry locally, at low cost or even no cost? Steel plants in the tropics could partner with local palm oil processors to feed palm shells into furnaces; industries close to urban centres might have a supply of used plastics at a nearby landfill.

This is what I call a "waste to value" proposition. Many people are already familiar with the "waste to energy" concept, in which waste is burned at high temperatures to produce energy. "Waste to energy" is very useful, but it is not the same as "waste to value", which relies on chemical reactions to transform waste into raw materials for reuse. Instead of looking at our growing mountains of rubbish as a burden, we need to re-imagine them as a chance for cheap, local resource recovery.

At the OneSteel plants using UNSW/OneSteel's polymer injection technology, which calibrates and optimises the waste blend injected into furnaces, 1.5 million used tyres have already been "re-formed", making EAF steelmaking more efficient in the process. My research since the development of PIT has focused on showing that it is not a "one-off", but a template for more far-reaching changes, which will be good for the environment and just as positive for industries and businesses.

Professor Veena Sahajwalla, director of UNSW's Centre for Sustainable Materials Research and Technology, was the 2012 Winner of The Australian/Shell Innovation Awards.

This extract of her speech delivered at UNSW for the Australia-China Climate Change Forum, first appeared in The Australian.

Designing a new solution to our waste crisis

UNSW advice steers ACT towards more efficient use of waste