Scientist of the Year 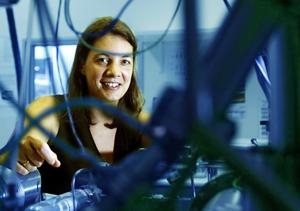 UNSW researchers have been honoured by winning six out of the 10 categories in the NSW Government’s 2011 Science and Engineering Awards, including the main honour of NSW Scientist of the Year.

The top prize went to Scientia Professor Michelle Simmons, who is the Director of the ARC Centre of Excellence for Quantum Computation and Communication Technology. She is also a Federation Fellow and a Professor of Physics at UNSW. Professor Simmons also won the category for Mathematics, Earth Sciences, Chemistry, Physics and Astronomy.

Professor Simmons has pioneered a radical technology for making electronic devices atom by atom in silicon. Her scientific vision has enabled the creation of the world's smallest precision transistor.

The category for Biomedical Sciences and Engineering was awarded to Professor Michelle Haber AM, who is Executive Director of the Children’s Cancer Institute Australia at UNSW. Professor Haber has made major contributions to Australia’s health and medical research efforts in the field of childhood cancer. Her research has demonstrated potential new treatment approaches for neuroblastoma. She has also been nominated for an Australian of the Year Award 2011.

The award for Emerging Research went to Scientia Professor Rose Amal, in a tie with Dr Matthew Todd, of The University of Sydney. Professor Amal is Director of the ARC Centre of Excellence for Functional Nanomaterials. Her research has focused on designing cutting-edge nanomaterials for environmental, renewable energy and health applications.

In the Invention category, the award was given to Associate Professor Thorsten Trupke, in a tie with Emeritus Professor Geoff Smith, of the University of Technology, Sydney. Professor Trupke is the Deputy Director of the ARC Photovoltaics Centre of Excellence at UNSW. His research includes solar cell and wafer inspection systems that help to improve the quality and competitiveness of the photovoltaic industry globally.

The NSW Deputy Premier and Minister for Trade and Investment, Mr Andrew Stoner, said Professor Simmons was pioneering the development of the world’s first quantum computer.

“The NSW Scientist of the Year Award is the State's most prestigious science prize, recognising high calibre research by our top scientists and engineers, and Professor Simmons is a worthy winner of the award,” Mr Stoner said.

“Quantum computers will be able to solve our biggest problems much faster than even the fastest computers operating today.

“Professor Simmons’s scientific vision and dedication to her field is exceptional. She is an amazing example of the high calibre of scientists and engineers working at our universities and research organisations across NSW.”

Professor Simmons said she was honoured to receive the award:  “Ten years ago I moved to Sydney from Cambridge because I felt there was an opportunity to do some phenomenally exciting research here. It was the best move I ever made.

“Quantum computing is not easy science – it takes many different skill sets. Here at UNSW we have become international leaders in this field. There is no-one else doing what we are doing and I am proud to lead this research effort.

“I’m pleased that this award will bring recognition to the work of the whole team, many of whom have been working on this project for years.”

Professor Simmons has three children under the age of eight. Speaking about the challenge of juggling a young family and a demanding science career, she said: “I think it’s important for women to know they can have a family and a career. It’s not easy, but it is possible and it’s incredibly rewarding.”

The ARC Centre for Quantum Computation and Communication Technology is an international research effort, funded by the Australian Research Council, NSW State Government, US Army Research Office and the Semiconductor Research Corporation and whose partners include the Department of Defence, IBM and Toshiba.