The ocean is a cacophany of sounds and ocean exploration is technically challenging, as the fruitless search for missing Malaysian flight MH370 shows, writes Erik van Sebille. 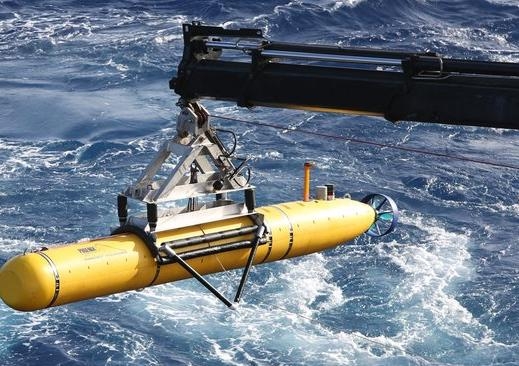 OPINION: The search for missing flight MH370 isn’t over in the Southern Indian Ocean – it’s just going deeper in an attempt to cover the ocean floor over a much wider area.

Much of the search effort so far has been carried out by the autonomous unmanned underwater vehicle Bluefin-21 on board the Australian Navy vessel Ocean Shield.

But the Australian Transport Safety Bureau (ATSB) this week said Bluefin-21 had completed its search over 850 square kilometres of ocean floor and had found no debris from the Malaysian Airlines aircraft.

Given the amount of time and effort spent on scouring such an area (not much bigger than the size of metropolitan Sydney) it will be virtually impossible to scale up an underwater search over the entire Indian Ocean.

The ATSB is now working with the Chinese Navy to carry out a bathymetric survey to map and measure the depths of the ocean floor.

This new survey will cover a much greater area of up to 60,000 square kilometres and depending on the weather could take up to three months to complete.

Such a bathymetric survey, performed from ships themselves, will likely not show the plane itself, though. For that we will need to get much closer to the ocean floor.

But the bathymetric survey might provide a baseline on the ocean floor. We currently have accurate maps of only 5% of the search area, and most of those data actually come from ships before the GPS era, which had to get their location from celestial navigation and were not nearly as accurate as today’s research vessels.

Understanding what’s down there

Better knowing what the ocean floor looks will help in modelling how sound echoes off undersea mountains. There are a number of sets of underwater microphones around the ocean for research purposes and other uses, including enforcing the Nuclear Test Ban Treaty.

Recordings from these microphones are now being analysed because they may have been able to detect the noise of an ocean impact by MH370. The better we know the bathymetry of the area, the better we can try to reverse engineer where the sound came from, taking into account all the echoes.

It will also help to assess what kinds of submarines are needed to go down, if the search team decided to do that again. The floor of the Indian Ocean in the region is rather hilly, with some areas not much deeper than 2,000 meters and other regions more than 7,000 meters deep.

Because there are only a handful of submarines in the world that can actually get to these abyssal depths, it is important to know what the minimum specifications of the submarine have to be.

Especially since the world’s premier ocean research institute, Woods Hole Oceanographic Institute, lost its deep-diving submersible Nereus a few weeks ago, there are not too many submarines to choose from.

The loss of this submarine also shows just how technically challenging it is to work at these great depths.

What about those pings?

Part of the search effort in the Southern Indian Ocean was directed at an area where four pings were heard and thought to be from the flight data recorder of MH370. But reports this week have cast doubt on the source of those underwater sounds.

The ocean is a cacophony of sounds. Since sound is the only way to communicate in sea water, everything from whales to tiny shrimp make sounds that can travel over hundreds of kilometers.

But there are also a lot of man-made sounds, from ships and even our own scientific instruments. As sound can travel in complicated paths, it is sometimes hard to localise where exactly a sound came from.

If anything, this search shows just how difficult it is to scour the deep oceans.

The team that were put onto the job – the Australian Navy to analyse the sounds and oceanographers from CSIRO to model the currents – are among the best-equipped people in the world to do this search. That they have now chased what turned out to be a false lead for so long just shows the complexity of their task.

The long wait for answers

The Malaysia Airlines Boeing 777 left Kuala Lumpur International Airport on March 8 headed for China’s capital Beijing with 239 passengers and crew on board.

The international search effort has so far not found any evidence on where the aircraft may have come down.

No single piece of debris from the plane wreck has been found. With time passing, it is becoming less likely we will ever find something of the plane washing up on our beaches.

As the waves and wind bend and break the debris into smaller and smaller pieces, it will become more difficult to identify them.

There is so much rubbish that gets washed up on beaches everywhere around the world, that unless a piece of debris actually has the words “Malaysian Airlines” written on it (or an identifiable aircraft serial number), it is virtually impossible to pick out the pieces from the plane.

Ocean exploration is technically challenging, painstakingly slow and very costly, as this search for MH370 has shown.

But the search also shows us that we need to understand our ocean better. We know more of the surface of Mars than of the bottom of our ocean, even though that covers 70% of our planet.

Dr Erik van Sebille is a lecturer in oceanography at UNSW.