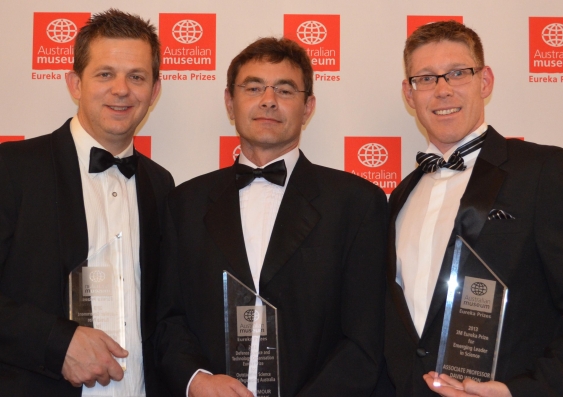 Winners of the 2013 awards, dubbed the “Oscars of Science”, were announced on September 4 at a gala dinner in the Sydney Town Hall, attended by more than 700 science, government, cultural and media leaders.

Associate Professor David Wilson, of the Kirby Institute, won the Eureka Prize for Emerging Leader in Science. He oversees Australia’s surveillance system for HIV, viral hepatitis, and sexually transmissible infections and is recognised by the World Bank, UNAIDS and the World Health Organisation as the Asia-Pacific region’s key program evaluator.

His life-saving research has included mathematical modelling of HIV and hepatitis C transmission showing the effectiveness of needle-syringe programs, and his promotion of evidence-based treatment of AIDS in Armenia, which reversed a rising trend in HIV infection linked to use of an unproven drug.

One of Australia’s most prolific science writers, he was commended for his ability to communicate complex ideas without trivialising them.

In the past two years he has published an award-winning book – Sex, Genes and Rock ‘n’ Roll: How Evolution has Shaped the Modern World.  He has also written 16 articles and 44 columns for The Conversation, featured in an ABC TV Catalyst special, given many print, radio and TV interviews and presented a host of public lectures.

Dr Mike Letnic, of the School of Biological, Earth and Environmental Sciences, was part of a team that won the Eureka Prize for Environmental Research.

Their research shows that dingoes – rather than being vermin, as is often claimed – help control kangaroo populations and can assist land managers in the control of invasive species such as foxes and feral cats.

The award’s 52 finalists were chosen from more than 1000 entries and competed for a share of the $170,000 In 17 prize categories including research and innovation, leadership and commercialisation and school science and science journalism.