UNSW Scientia Professor Martin Green has been named the New South Wales Scientist of the Year - leading a stellar performance by UNSW in the inaugural State awards for scientific excellence. 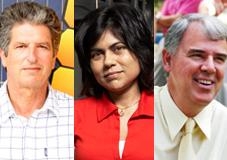 UNSW researchers won four of the nine awards given at a ceremony in Sydney on Thursday night, including two won by Professor Green.

Professor Green, a Federation Fellow and Executive Research Director of the ARC Photovoltaics Centre of Excellence at UNSW, was recognised with the State's highest award for science for his innovative work in solar cell development. He also won the Environment, Water and Climate Change Sciences category.

Professor Green has led the development of the world's highest efficiency silicon solar cells and is a co-inventor of "second-generation" silicon-on-glass solar cell technology, which offers dramatic cost reductions for solar cell manufacture by reducing the amount of silicon used. He is now working on high-efficiency "third generation" thin-film photovoltaic technology.

In an interview with the NSW Office for Science and Medical Research, Professor Green said making solar-generated electricity affordable was one of the most effective ways to combat climate change.

"I think solar energy conversion is ... widely accepted as providing a solution, provided the costs can be brought down sufficiently through improved technology," he said.

Professor Veena Sahajwalla, Director of the UNSW Centre for Sustainable Materials Research and Technology (SmaRT), won the Engineering Sciences Category of the awards for her invention of environmentally friendly technology which uses waste plastic to replace coke and coal in steelmaking.

And Professor Philip Hogg, Director of the UNSW Cancer Research Centre, won the Biomedical Sciences Category for his development of a class of cancer drugs that starve tumours of their blood supply by rendering inactive the cells which form blood vessels in tumours.

"On behalf of all of us at UNSW, I congratulate Martin Green, Veena Sahajwalla and Phillip Hogg for their NSW Scientist on the Year Awards," Professor Hilmer said.

"This recognition acknowledges their outstanding contribution to innovation and leadership in research. We have so much talent in research and teaching at UNSW - evidenced also by our unprecedented success at the recent Eureka Awards and the number one spot in the Australia-wide Good Universities Guide for 2009."