Photovoltaic researchers at UNSW have secured more than $7 million from the first round of the Australian Renewable Energy Agency's Research and Development Program. 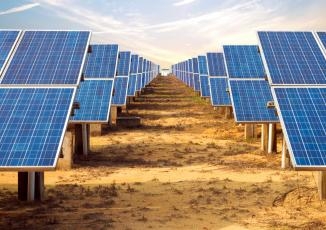 Photovoltaic researchers at UNSW have secured more than $7 million in support from the first round of the Australian Renewable Energy Agency's (ARENA) Research and Development Program.

The five grants – three for UNSW-led projects and two for ANU-led projects with UNSW involvement – cover research that will improve performance or reduce manufacturing costs for solar technologies.

Bob Baldwin, Parliamentary Secretary to the Minister for Industry, announced the first round of grants for 12 projects worth $21.5 million, at an ARENA-hosted event at UNSW today.

"This month marks the 40th anniversary of the beginning of photovoltaics research here at UNSW. These latest grants build on four decades of innovation and leadership in the field," said Darren Bagnall, Head of the School of Photovoltaic and Renewable Energy Engineering (SPREE).

Faculty of Engineering Dean Graham Davies added: "It is great to see that the world-leading research in Photovoltaics at UNSW is being supported by the Government."

A second UNSW-led project is focused on high-efficiency silicon and perovskite tandem cells and modules.

Perovskite is an emerging material that can be paired with silicon to produce solar panels that could be cheaper and more efficient than conventional silicon-only panels.

A third UNSW-led project aims to use a new measurement system and advanced simulation tools to investigate processes that impact the performance of solar cells. Work on this project has also commenced.

UNSW is involved in a further two projects that are being led by ANU researchers.

All projects are expected to finish between 2018 and 2020, and include additional funding from UNSW and industry.