The UNSW Chemical Society will celebrate its centenary this week with a special meeting –traditonally called a “conversazione”– to be addressed by the Vice-Chancellor. 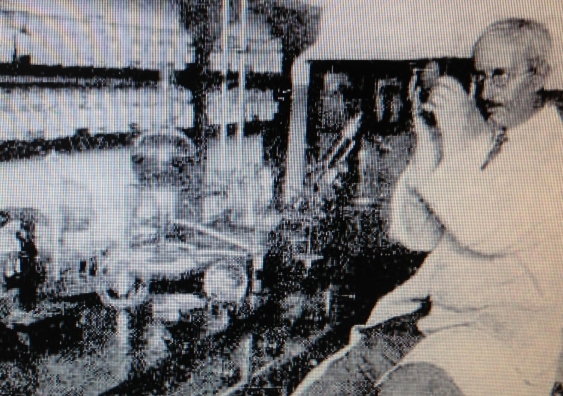 Dr Robert Murphy in a research laboratory in 1933 built with a grant to the society. credit: SMH

The UNSW Chemical Society will celebrate its centenary this week with a special meeting - or a “conversazione”, as they were traditionally called.

The speakers will include UNSW Vice-Chancellor, Professor Fred Hilmer, Professor Leonard Lindoy, from the University of Sydney, Professor Sam Stupp from Northwestern University in the US, and Dr Edith Chow of CSIRO.

This week’s conversazione will occur exactly 100 years to the day from the first meeting on 2 August 1913 of the society, which was then called the Sydney Technical College Chemical Society.

The first president was William John Clunies Ross, lecturer in charge of chemistry at the college in Ultimo. Meetings were held on Saturdays and the annual subscription was five shillings.

“It is one of the oldest chemical societies in Australia and it has moved with the times and with the location of UNSW,” says the current president, Dr Neeraj Sharma, of the UNSW School of Chemistry.

The society manages a number of bequests which have allowed it to invite many distinguished researchers from Australia and around the world – including numerous Nobel laureates - to come and give lectures.

“UNSW Chemical Society seminars provide an opportunity for students and staff to interact with members of the worldwide scientific community and to be exposed to a range of chemical disciplines outside their own particular subject area,” says Dr Sharma.

The 100th anniversary celebrations will help raise funds for the Dwyer Lecture and Medal, named after the inorganic chemist, Professor Francis Dwyer.

One of the first endowments to the society was a 100 pound gift received in 1915 from Parke Pope, chairman of the directors of the retail firm, Farmers & Co Ltd.

It was donated to set up a research laboratory in the college grounds, according to an article on the history of the society, written by Professor Ian Rae and published in the May edition of the journal Chemistry in Australia.

When the laboratory moved into the college’s newly refurbished chemistry department, a press photographer recorded the moment.

On 22 September 1933 the Sydney Morning Herald published a photograph of a dapper chemist, sitting on a stool beside a bench of glassware, staring intently at a piece of equipment.

He had prime spot in on a page containing an interesting mix of images – positioned next to the Japanese battleship, Hiyei, and above an elderly Dulwich Hill couple celebrating their diamond wedding anniversary and a group of young army volunteers receiving rifle training.

The photograph was captioned: “Dr Robert K. Murphy, director of the chemistry department, Sydney Technical College, at work in the transferred Parke-Pope laboratory, which was opened last night.”

The organising committee for the centenary have gathered other archival material for display at the celebrations.