An extinct species of koala that lived in the rainforest canopies of northern Australia about 20 million years ago has been named after a famous Australian – Dick Smith. 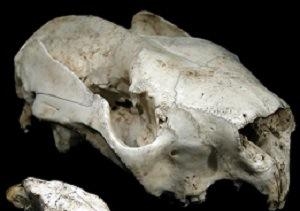 Skull of extinct koala, Litokoala dicksmithi, beside the larger skull of a modern koala

A newly discovered extinct species of koala that lived in the rainforest canopies of northern Australia about 20 million years ago has been named after a famous Australian – Dick Smith.
The small, ancient koala was given the species name Litokoala dicksmithi, in honour of the aviator, adventurer and philanthropist.
UNSW palaeontologist, Dr Karen Black, who led the research, said:  “We chose the name to thank Mr Smith for his long-term financial support of Australian science, in particular, of fossil research at the Riversleigh World Heritage Area in north western Queensland.”
Dr Black, along with Dr Julien Louys and Dr Gilbert Price from the University of Queensland, describe the new species in the Journal of Systematic Palaeontology.
The discovery brings the number of known extinct koala species to 18. Today, one species of koala is alive.
An exceptionally well-preserved partial skull of the new extinct species was unearthed, whereas only teeth or jaws of most other extinct koala species have been found.
“The discovery of Litokoala dicksmithi  is particularly significant because it is one of only two fossil koala species that are known from material preserving the facial region including the snout,” Dr Black said.
“The other species, called Nimiokoala greystanesi, which was also discovered at Riversleigh, had a skull that was very possum-like in appearance.
“Litokoala dicksmithi, however, appears to have been much more closely related to the modern koala with numerous similarities in the skull suggesting a more koala-like, rather than possum-like, face.”
Litokoala dicksmithi was only about a third of the size of living koalas, weighing in at approximately three to four kilograms.
“An interesting feature of the Litokoala skull is the extremely large eye sockets which suggest the intriguing possibility that these koalas were nocturnal with greater visual acuity than the living koala,” Dr Black said.
“Combined with its small body size, this suggests that Litokoala dicksmithi was a more active, agile tree climber than its sleepy, relatively sedentary, cousin that we know.”
Unlike today’s eucalypt-munching koala species, Litokoala dicksmithi fed on the rainforest plants that covered much of northern Australia 20 million years ago and may also have eaten some fruit.
The onset of dryer conditions in Australia about 15 million years ago led to the contraction of rainforest habitats and the apparent extinction of many koala species including Litokoala dicksmithi.
This is the second Litokoala species named from the Riversleigh World Heritage Area. The first species was named Litokoala garyjohnstoni  in 2007, to honour philanthropist, Gary Johnston, CEO of Jaycar Ltd, who donated $1 million to UNSW to create Australia’s first Chair of Water Management.  The name was chosen by Dr Louys, Dr Black, Professor Michael Archer, Associate Professor Sue Hand and Mr Henk Godthelp.
Media contact: UNSW Science media: Deborah Smith, 9385 7307; 0478 492 060, Deborah.Smith@unsw.edu.au
Twitter Facebook LinkedIn