An aerial survey of waterbirds in eastern Australia covering about a third of the continent is underway for another year, led by UNSW's Richard Kingsford. 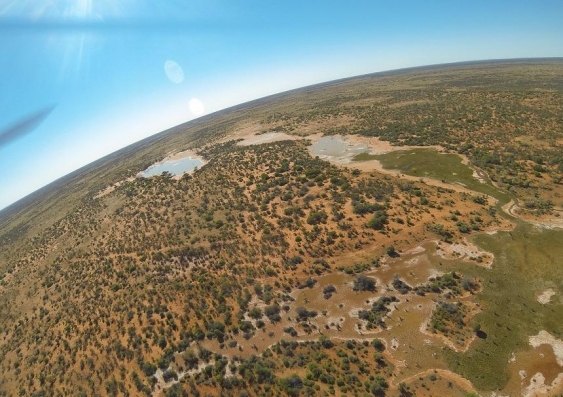 The only wetlands with water south of Tibooburra in NSW are those filled by artesian bores.

An aerial survey of waterbirds in eastern Australia covering about a third of the continent is underway for another year.

Led by UNSW’s Professor Richard Kingsford, researchers are using a small plane to fly east-west along ten 30-kilometre-wide bands that stretch from Victoria to the Northern Territory. A total of about 2000 wetlands will be observed, with a gap of about 200 kilometres separating each survey band.

This year’s annual trip is the 32nd that has been made and the results will add to what is one of Australia’s most important long-term datasets on the health and biodiversity of our river and wetland environments.

“It’s always exciting to see the same places year in and year out,” says Professor Kingsford, who is writing a blog about the survey here, with accompanying photographs and videos.

Describing the flight north from Sydney above the Myall Lakes National Park he writes: “The swans graze on the seagrass beds in the shallows, while pied and great cormorants dry their wings in the dead trees around the lake, taking off in flocks of up to 50 as we fly close by.”

Stradbroke Island in Queensland is one of the most thrilling sites of the coastal leg, because it is here the team usually spots its first turtles, he says: “From our height they look like tiny ants floating lazily in the shallow lagoon. The azure-coloured water also shows the dark, long bodies of the odd shark. This year we were even lucky to see a couple of dugongs.”

On past trips, thousands of egrets and magpie geese were spotted on the floodplains of the Proserpine River, inland from the Whitsunday Islands.

“But the spectacular flocks I remember surveying in the late 1980s and 1990s have been gone for some time – just one of the many mysteries that gets one thinking about long data sets,” writes Professor Kingsford, Director of the Centre for Ecosystem Science in the UNSW School of Biological, Earth and Environmental Sciences.

“We have seen the natural boom and busts cycles, but here the booms seem muted over time, following a similar pattern to the Murray Darling Basin. Perhaps the building of the Proserpine Dam has contributed.”

The survey will continue until mid-November.