Opinion Alien life: coming to a planet near you?

I have been searching for evidence of extra-terrestrial life since the 1980s. I believe that we will probably find it, writes Malcolm Walter. 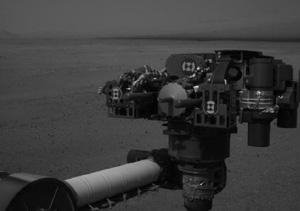 OPINION: I have been searching for evidence of extra-terrestrial life since the 1980s. I believe that we will probably find it.

I'm not a UFO spotter. Nor do I imagine the latest NASA rover, Curiosity, will come across any little green men as it methodically combs and probes Mars over the next few years, despite last week's historic broadcast of a recorded human voice from Mars, or the Curiosity's joke "tweet" about alien life.

But I do think Mars is probably our best bet, at least in this solar system, if we are going to finally answer that eternal question: is there anything out there? And I believe Australia has a major role to play in this particular space race of the 21st century. While the 20th century was marked by the "giant leap" made by Neil Armstrong as he first stepped out onto the surface of the moon, this century's quests lie on Mars and beyond.

We got our first hint of life on Mars in the 1890s when the American astronomer and entrepreneur Percival Lowell mapped some unusual surface lineations which did not appear to be naturally formed. He adopted the popular view that the criss-crossing lines were canals to carry water constructed by some form of intelligent life. Science fiction went even further, suggesting the canals were evidence of an ancient Martian civilisation's last ditch attempt to survive, and that such desperate creatures might flee their dying planet and invade Earth.

When the Mariner 4 spacecraft flew past Mars in the mid-1960s, snapping the first images of the red planet, it found nothing but craters carved out by meteorite and asteroid strikes.

So, wrong in this instance. But later missions imaged dry river beds, volcanoes, and a smooth northern hemisphere that may once have had an ocean.

Then in 1984, US meteorite hunters found a softball-sized rock in Antarctica, and we again held our breath. A decade or so later, the meteorite - by then famously known as ALH84001 - was reported in the US to carry evidence of former life. The finding was so extraordinary that the NASA Astrobiology Institute was established to study the origins, evolution, distribution, and future of life in the universe.

Ironically, this finding was also wrong. ALH84001 turned out to be a furphy; data had been incorrectly interpreted, leading to the wrong conclusion.

However, NASA's Australian research partnerships had been forged and the Pilbara would steadily become an important research analogue for Mars; that is, an Earth-based laboratory giving us a possible insight into life on Mars billions of years ago.

The reason why Australia is so important is simple. There is scientific consensus that early Earth was like early Mars; both were warm and wet. The evidence is that Mars still had liquid water as recently as three billion years ago, before it became the mostly frozen planet it is today.

We are building a picture of life on Earth more than three billion years ago using sites like the Pilbara, where there is good evidence in 3.5 billion-year-old rocks of microbes which lived during the period when the planets were so similar. This means it is feasible there was once life on Mars, although we have no evidence to date. And because we also know microbes can survive deep into rock layers, there is also a chance life exists on Mars today.

Why? Because we don't know how life began on Earth, we can't accurately estimate the likelihood of life starting anywhere else. That means life on Earth could be a stupendously improbable accident and we may be alone in the universe. However, if life began naturally and quickly, then it might also have started all over the universe.

We don't know. But we do want to find out. A second origin of life would open up the extraordinary possibility of life on some of the thousands of planets we have discovered orbiting other stars beyond our solar system in the past couple of decades.

Cynics tend to complain that space programs spend unimaginable billions on missions that are a thinly disguised means of trialling new technology for eventual military purposes, or simply to foster a nation's prestige on the world stage.

Certainly, the solar system is pretty busy right now; since 1960, there have been about 100 planetary missions, most by NASA, the former Soviet Union, and the European Space Agency. NASA has recently landed the most complex rover yet on Mars, Curiosity; India has since announced its own Mars space probe; and Russia, following the failure of its Mars mission last year, announced it is sending probes to Jupiter and Venus, and planning to land a network of unmanned stations on Mars. Japan and China are also active players.

As a geologist turned astrobiologist, I am more interested in life, or evidence of it. The question "is there anything out there?" doesn't keep me awake at night, nor do I expect this Mars rover mission has more than a 1 per cent chance of finding evidence of life; that would be like finding a needle in a haystack given that it is tasked to operate as a robotic geologist, not as a biologist or palaeontologist.

But the answer is still "probably". And there is a good chance that we will know for sure before the end of this century.

Malcolm Walter is Professor of Astrobiology at UNSW and director of the Australian Centre for Astrobiology.