UNSW Professor Chris Turney and his team answer some commonly asked questions about the Australasian Antarctic Expedition, whose research vessel became trapped in ice in December. 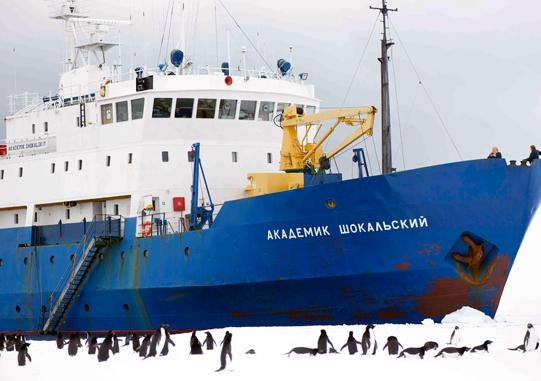 We have been inundated with enquiries about the Australasian Antarctic Expedition. It is wonderful to learn how much interest there has been in our six-week long science programme but unfortunately we cannot answer all questions individually. As a result we have put together FAQs that we hope will answer most of your questions. To learn more about the expedition, please visit our website and follow the links to the various social media sites (see below) to get regular updates.

Are the team all safe?

Most important of all, everyone on the Australasian Antarctic Expedition 2013-2014 is safe and well. The team members send their best wishes and want to give their sincere thanks to the Australian, Chinese, French and American teams for all their help and support.

What is the aim of the Australasian Antarctic Expedition 2013-2014 and how is it funded?

The aim is to follow the route of Sir Douglas Mawson’s original expedition of 1911-1914 to discover what changes are taking place in the Southern Ocean and Commonwealth Bay[1]. This is NOT an attempt to recreate the Mawson expedition, rather to take a mutidisciplinary team south to investigate the marked changes known to be taking place across the region.

Inspired by Mawson’s efforts, we decided to use a funding model that brought the public and science together. One hundred years ago, Antarctic science expeditions funded their programs by an inspired range of schemes, including lotteries, sponsorship and selling berths to the public. The expeditions of old managed to excite the public in science and exploration and, in doing so, fund work in a remote region that national programs were not able to support.

Taking this original, but largely unused model of funding research, we offered berths on the expedition vessel, the MV Akademik Shokalskiy, for science volunteers, managing in the process to fund a large multidisciplinary project in a remote location of global significance. Importantly, many of our projects had numerous international partners.

Why is the region south of Australia and New Zealand so important scientifically?

Crucially, the vast region investigated by the original Australasian Antarctic Expedition is intrinsically linked to the global oceanographic and atmospheric circulation systems. And yet, in spite of a century of research, major questions remain.

Contemporary poleward shifting westerly winds[2] are known to be influencing the Antarctic Circumpolar Current, increasing transitory upwelling of Circumpolar Deep Water onto the Antarctic continental shelf[3] while the 2010 loss of the Mertz Glacier tongue adjacent to the Mertz Polynya – a major source of Antarctic Bottom Water (AABW) formation – as a result of the collision with iceberg B09B has resulted in the formation of extensive sea ice in Commonwealth Bay.

The effect on circulation and ocean properties[4], biodiversity[5] and stability of the East Antarctic ice sheet remains unclear[6].

How long did the expedition take to plan and what was the inspiration?

The expedition took two years to plan, inspired by the events surrounding 1912: The Year The World Discovered Antarctica (Text Publishing, Melbourne) and our own research agendas in the region.

Can you provide details about the expedition vessel, the MV Akademik Shokalskiy?

The AAE’s expedition research vessel, the MV Akademik Shokalskiy, is a true expedition vessel. Built in 1982 for polar and oceanographic research, she is fully ice-strengthened and capable of breaking through first year fast ice. This class of vessel is world renowned for Polar Expedition Cruising because of its strength, manoeuvrability and unique classification as an ice breaker.

The vessel is purpose built for operating in high latitude areas of the world and has an impressive record of voyages to Antarctica and the Arctic. Most importantly it has Russian register KM Ice classification (ice breaking capability), and the master and crew have decades of experience in this environment.

Who are the national and international partners of the AAE?

The science team members are all world experts in their fields. Details of the institutions can also be found on our website and include UNSW, Australia, and the universities of Victoria (Wellington, New Zealand), Exeter (UK), and Wisconsin (USA) as well as numerous other international research organizations, such as Landcare Research (New Zealand), National Oceanographic and Atmospheric Administration (USA), Sydney Institute of Marine Sciences (Australia) and Scripps Institute of Marine Sciences (USA).

What science was the team undertaking?

We posted daily reports on the expedition findings using social media sites (for details see below), highlighting the science results as we progressed, describing many firsts for the region, including detailed marine and terrestrial ecological studies, glaciological reconstructions, and high-resolution palaeoclimate analysis of tree rings, peats and ocean cores from the subantarctic islands.

Reaching Commonwealth Bay, we successfully pioneered a route into Mawson’s Huts, crossing 65 kilometres of sea ice, to deliver two teams of scientists and conservators and undertook a wide ranging study and preservation of the site, including ornithology, benthic studies, hydrography and glacial reconstruction.

Alongside this, important work was done on the conservation of Mawson’s Huts, an airstrip was surveyed for future visits, the Automatic Weather Station was serviced and data collected, and valuable Global Positioning System data for monitoring isostatic uplift was collected.

The work on the six weeks of the expedition was permitted by the New Zealand Department of Conservation, Tasmanian Parks and Wildlife and the Australian Antarctic Division.

What was the sequence of events that led to the expedition vessel the MV Akademik Shokalskiy getting caught by thick, multiyear ice on 23 December?

Our final day’s work on the continent lay to the east in the Mertz Polynya. Here the sea ice cover is considerably less of B09B and open water is present where the tongue of the glacier had once been.

Samples were collected and measurements made. But at the end of the day it was clear that something had changed.

The satellite data leading up to our arrival had indicated open clear water and the fast ice edge we had moored against suggested it had been so for some time. As the Shokalskiy attempted to leave the area, however, we found ourselves surrounded by a mass breakout of multiyear ice.

This was a major event, with three-metre to four-metre thick blocks of sea ice surrounding the vessel, apparently arriving from the other side of the Mertz Glacier. Despite the best efforts of our captain we could not find a route out.

It was deeply frustrating. We had been caught just two to four nautical miles from the edge. Crucially, the following day a low pressure system hit the area and the accompanying pervasive southeasterly winds that battered our location over the next 36 to 48 hours increased our distance to the sea ice edge to 20 miles.

The science continued as best we could but it was clear we needed help to get out. We were not frozen in, as reported by some observers: we were pinned in by remobilised ice, reminding us this area is still undergoing massive change years after the events of iceberg B09B.

Why was the distress alert issued by the MV Akademik Shokalskiy?

On the morning of the 24 December, the Captain issued a distress alert. The vessel was beset in ice, essentially safe, but the Captain was concerned about the movement of two icebergs which had the potential to collide with the vessel.

Was the sea ice breakout that trapped the MV Akademik Shokalskiy linked to climate change?

No. We were caught by multiyear ice that had been moved from one side of the Mertz Polynya to the other by weather. We were not frozen in by colder conditions. For further details, please see our blog first posted on the 31 December.

How did the expedition provide communication with the outside world?

We primarily used the wonderful Inmarsat HDR Explorer 710 system which allowed the Australasian Antarctic Expedition to provide high-quality communications with the outside world (including streamed television footage to many networks).

This was backed up by Iridium satellite phones courtesy of Skycom, New Zealand and Inmarsat installed on the MV Akademik Shokalskiy. The SPOT Connect system allowed us to report our position daily direct to individuals and globally via Twitter and Facebook. EPIRBs and personal locator beacons were carried on the ship and with shore parties.

How was the rescue co-ordinated and what were the icebreakers involved in the rescue effort?

The rescue was co-ordinated by the Australian Marine Rescue Co-ordination Centre (AMRCC) and involved the Australian Antarctic Division's Aurora Australis, the Chinese Xue Long, the French Astrolabe, and most recently the US Polar Star.

What scientific results can the expedition report?

Thanks for everyones support. We are all looking forward to seeing family and friends soon.

The AAE Team
On board the AAD icebreaker, Aurora australis
6 January 2014