Opinion Are you furious? Body cues tell us more than faces

With intense positive and negative emotions intrinsically linked by overlapping brain systems, it may be that these emotions are more difficult to discriminate than originally thought, writes Amy Reichelt. 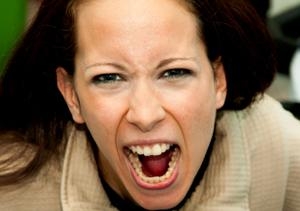 OPINION: As social creatures, non-verbal communication through facial expression is important in portraying emotions – and because of this, it’s interpreted rapidly and accurately.

Regardless of culture, defined facial expressions exist. It’s long been thought anger, surprise, contempt, disgust, happiness and sadness are recognised universally by humans, although even this has been questioned more recently.

These expressions are often involuntary and their universality allows cross-cultural interpretation. Certain expressions can also be interpreted in a cross-species manner: the expression of an enraged dog prevents us from unwittingly approaching a potential danger whereas a contented dog invites our approach.

But when the emotional expression is intense – is it really that easy to interpret? A study released today in Science suggests we may actually struggle to discriminate extreme emotions.

For the Science paper, led by Hillel Aviezer of Princeton University, studies were undertaken to investigate whether dimensionally polarised emotions – extreme fear versus immense joyfulness – are really interpreted and encoded within the brain in such a distinct manner.

Intense emotions are thought to activate maximally distinct facial muscles to aid visual discrimination between positive and negative emotional states. But the processing of distinct emotions at a neurobiological level suggests that, despite motoric (relating to muscular movement) distinctiveness, intense emotions share similar neuroanatomy and neurochemistry.

Functional imaging studies in humans have demonstrated that brain regions such as the amygdala, nucleus accumbens, insular and orbitofrontal cortices show increased activation during both positive and negative emotions.

Similarly, the opioid system, which the highly addictive drugs morphine and heroin activate, is also involved in stress and pain sensitisation.

With intense positive and negative emotions intrinsically linked by overlapping brain systems, it may be that these emotions are more difficult to discriminate than originally proposed.

For the Science study, Aviezer and colleagues demonstrated that participants struggled to determine whether intense emotions were positive or negative when shown facial expressions alone. The images used were of the immediate reactions of professional tennis players when winning or losing high-stakes points.

It was found that when facial expressions were combined with the appropriate body cues, participants were easily able to discriminate facial responses to winning or losing. The participants were also able to correctly identify emotions by body cues alone.

This indicates the crucial importance of postural cues in the identification of strong emotions. While participants were unable to determine the intensity of the emotion from body cues alone, participant ratings of isolated facial expressions accurately conveyed emotional intensity.

A further experiment combined the facial and body cues in a hybrid manner: winning faces combined with losing bodies, and losing faces with winning bodies.

It appears from the findings of these experiments that the contextual cues portrayed by body positions are vital in identifying intense emotions.

From an evolutionary viewpoint, body cues are more salient than facial expressions from a distance or in poor visual conditions.

Body cues can be interpreted as a “silent alarm” acting as a predictor of dangerous situations or to indicate a fortuitous occurrence. Faces are rich in information close up, but from a distance body cues are more salient.

The authors interpret these data to indicate that facial musculature is incapable of accurately portraying intense emotions. Much like the acoustic distortion of music playing at a high volume on speakers, signals become degraded and indistinguishable, conveying only intensity as opposed to a tangible emotion.

On a similar note, the authors indicate that it’s very difficult to distinguish extreme vocal emotional expressions – screams of pleasure or pain. It may be that humans are simply encoding the intensity of an emotional response as that is what conveys the salience as opposed to the facial expression.

The “noisy”, intense facial signal is accompanied by body cues to disambiguate the emotion, which is also typically followed by more interpretable expressions such as smiling following an extremely joyful experience.

Amy Reichelt is a Research Fellow in Behavioural Neuroscience at UNSW.