The greatest diversity of small insect-eating microbats in the Sydney region is not in the national parks that ring the city but in the western suburbs, according to a new study. 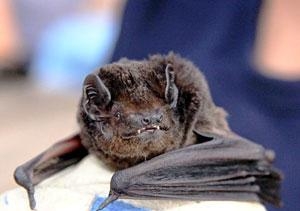 The greatest diversity of small insect-eating microbats in the Sydney region is not in the national parks that ring the city but in its western suburbs, according to a new study.

The key difference between the two habitats is the richer soils of those suburbs, reflecting the preference of Sydney’s early settlers for fertile farmland and water resources over the drier, sandy soils where the parks were later established.

The three-year study, led by Caragh Threlfall – dubbed in the media as “Batgirl” for her doctoral research – also found that in the more densely settled inner suburbs most microbats are absent.

Dr Threlfall, now a research fellow at the University of Melbourne, and colleagues have published the results of their study in the journal PLOS One.

They found that only one of Sydney’s 20 or so species of microbats – Gould’s wattled bat – can routinely tolerate life in the highly urbanised inner city, while the less-developed suburbs of Penrith, Blacktown, Liverpool and Cabramatta were the most attractive to them. Bushy areas around creeks and rivers were especially attractive to them.

“We found that insect biomass was at least 10 times greater within suburban landscapes in bushland and backyards located on the most fertile soils than in the nutrient-poor sandy landscapes,” says Dr Threlfall.

‘‘Urban restoration efforts should focus on creeklines and bushland reserves in areas of good soils, to benefit both insects and the bats that depend on them to survive.’’

While some species were found to have adapted to roosting in man-made structures, such as sheds and drains, most still depend on old tree hollows for refuge and breeding. Even though national parks offer more roosting trees and caves, the insect life is richer in the better but more urbanised soils.

The study involved recording and analysing bat calls at 113 sites representing a wide variety of land-use types with 60 kilometres of the CBD, as well as nocturnal insect trapping.