Opinion Beards may be in, but for how long? 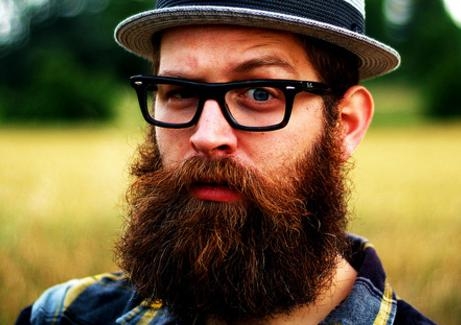 Beards are back, for a while. Image: Juan Luis/Flickr

OPINION: If you haven’t been outdoors in a few years, you might not have noticed that beards are back. Back in such a big way that apparently many New York hipsters are paying north of US$8,000 for “facial hair transplants” to embellish their patchy beards.

While the hipster subculture appears to be ground zero for the latest swerve toward beardedness, men who would not be seen dead in skinny jeans or thrift-shop cardigans are letting the whiskers grow in a way that hasn’t been fashionable for decades.

Why are beards sprouting from the unlikeliest faces? And is there anything that might make them stop?

The advantage of rarity

Today in Biology Letters we provide experimental insights into why beard fashions come and go, and why there is no single optimum pattern of facial hair. By we, I mean my former Honours student Zinnia Janif, my colleague and Zinnia’s co-supervisor Dr Barnaby Dixson and me.

In evolutionary genetics, NFD selection is an important force, favouring rare genetic alleles over more common ones. In guppies, for example, males bearing rare combinations of coloured spots are both less likely to be preyed on and more likely to gain matings in the wild. So a rare colour pattern can spread very rapidly until it becomes so common it attracts attention from predatory fish and starts looking like old hat to female guppies.

The selective advantages enjoyed by rare colour patterns explain why guppy colour patterns are among the most genetically variable traits yet studied. Could more subtle forms of NFD selection explain why so much genetic variation persists in most traits, even though natural selection is expected to remove genetic variation by eliminating “bad” genes. Under NFD, “good” or “bad” depends on how common the gene is.

What if, we speculated, rarity also operated in the world of fashion? In this case, what if rare patterns of facial hair enjoy an advantage purely on account of their rarity?

To test this idea we set up a simple experiment using a suite of photographs of 36 men. Each man had been photographed when clean-shaven, with five days of growth (we call this light stubble), 10 days of growth (heavy stubble) and at least four weeks of untrimmed growth (full beard).

Subjects, recruited via our research group webpage (where we are always seeking subjects and Facebook - thanks IFLS for the traffic), each rated 36 faces – one of each man. Over the first 24 faces we manipulated the rarity of beard types. Subjects either saw all 24 men clean shaven, all 24 with full beards, or six men from each of the four levels of beardedness.

We then analysed how subjects rated the same – last – 12 pictures comprising three from each beard level. In line with our prediction, when clean-shaven faces were rare (among the early 24 pictures) they enjoyed a significant premium in attractiveness ratings (in the last 12) over when they were common. And when full beards were rare or when the four levels of beardedness were evenly distributed, full beards enjoyed significantly higher attractiveness than when full beards were common. Five- and 10-day stubble did not really vary in attractiveness across the three treatments.

What this means is that, under experimental conditions at least, patterns of facial hair enjoy greater attractiveness when rare than when they are common. Whether this scales to more nuanced judgements in the more complex and varied real world remains to be seen. But it suggests that beard styles are likely to grow less attractive as they become more popular. And that innovative new styles may enjoy a premium while they are still rare.

Negative frequency dependent choices might well be an important ingredient in changing facial hair fashions. The current fad for facial hair is just the latest development in a long history.

Dwight E. Robinson went to the trouble of scoring the facial grooming of all men pictured in the London Illustrated News between 1842 and 1972. In the 1890s, more than 90% of men pictured had some form of facial hair, a figure that dropped to below 20% by 1970. Sideburns occupied the news in the mid-19th century, whereas full beards reigned from 1870 to 1900, only to be replaced by moustaches.

Negative frequency dependence might play a role early in an establishing fashion.

The New York Times reckons the current beard trend emerged among local hipsters in late 2005. I’m not sure the NYT would notice anything that happened or – heaven forbid – started outside of Manhattan or Brooklyn. But suffice to say the current fashion has been almost a decade in the making.

Noveau-beard has been propelled along the way by various sportsmen, movie stars and musicians. But the fashion has now spread to the point where astute commentators reckon the tide of hipster cool has turned. When Buzzfeed breathlessly lists the “51 Hottest Hollywood Beards”, it’s time to seek higher ground to avoid the tsunami set off by the implosion of cool.

That is one way in which negative frequency dependence can work: when a fashion goes mainstream it loses the advantage of rarity. And so it begins to subside.

Not everybody should grow a beard

Much of this discussion has concerned the attractiveness of beards. But although many hirsute men have formed the zealous conviction that their beards place them at an advantage with the ladies, evidence is far more equivocal.

Dixson’s previous research has shown that heavy stubble – a substantial growth that is well kept – is more attractive than clean shaven, light stubble or a full beard. And individual women vary in their tastes, some are pro, and others vehemently anti-whisker.

Far less ambiguously, beards tend to make those men who can grow them look more masculine. Hardly surprising, actually, given the ability to grow facial hair kicks in during puberty, marking the transition to manhood. The beard might be as much a signal to other men as it is to women, which might explain why so many warrior cultures grew resplendent beards, and why professional sports teams grow beards in playoff-time solidarity.

Female attraction to bearded men can arise due to the manly connotations of facial hair. Nicki Daniels certainly makes this point in her hilarious Open letter to bearded hipsters.

"Unfortunately, you guys have turned it into a fashion statement. The beard has turned into the padded bra of masculinity. Sure it looks sexy, but whatcha got under there? There’s a whole generation running around looking like lumberjacks, and most of you can’t change a fucking tyre."

If the messages signalled by growing facial hair are diminished when every man-boy over 20 is sporting a beard, that constitutes another way in which negative frequency dependent choice might work.

The reasons beards diminish in value when everyone is wearing them remain to be teased apart, but the fact that they do suggests that the hipster beard, like the handlebar moustache, the mutton chop and countless other fashions before them, will, in time, pass.

P.S. Beard Season is coming up

You may already have encountered Jimmy Niggles (aka Scott Maggs) and friends who are raising awareness about melanoma – in honour of their mate Wes who lost his life to melanoma at age 26 – through their Beard Season campaign. Jimmy uses his resplendent beard to start conversations with strangers (and leverage considerable media interest) about the importance of having their skin checked. Jimmy is currently selling his beard for A$1 million in order to raise money for melanoma research.

Talk about a positive expression of contemporary masculinity.