Taking their inspiration from Nature, UNSW scientists have developed a new method for carrying out chemical reduction – an industrial process used to produce fuels and chemicals that are vital for modern society. 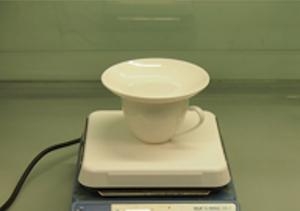 Taking their inspiration from Nature, scientists at the University of New South Wales have developed a new method for carrying out chemical reduction – an industrial process used to produce fuels and chemicals that are vital for modern society.

Their catalyst-based approach has the big advantages that it uses cheap, replenishable reagents and it works well at room temperature and in air – so much so, it can even be carried out safely in a teacup.

The research, by a team led by Associate Professor Stephen Colbran, of the UNSW School of Chemistry, has been published as the cover of the prestigious journal, Angewandte Chemie.

The catalyst they designed mimics the activity of naturally occurring enzymes that catalyse reduction, such as alcohol dehydrogenase in yeast, that helps produce alcohol from sugar.

“Industrial chemical reduction processes underpin human existence, but are unsustainable because they irreversibly consume reagents that are made at prohibitively high energy cost,” Dr Colbran says.

“We believe our new biomimetic design may have wide applications in chemical reduction.”

Chemical reduction involves the addition of electrons to a substance, and is the basis of making many fuels, including the sugars that plants produce during photosynthesis.

In industry, molecular hydrogen and reactive reagents such as sodium borohydride are used as reducing agents during the production of pharmaceuticals, agrichemicals and ammonia for fertiliser.

“Manufacture of these substances is energy costly, leads to the release of carbon dioxide and they are difficult to handle and store,” Dr Colbran says. “So we decided to look at nature to see how nature does it.”

The team combined a transition metal complex containing rhodium with a Hantzsch dihydropyridine – an organic donor of a hydride ion similar to biological nicotinamides – to produce the new bio-inspired catalyst. They tested it on a common process – reduction of imines – and were surprised to find it worked in ambient conditions with more than 90 per cent efficiency in most cases.

Dr Colbran even tested it out in a teacup. “I thought it would be a bit of fun. And it makes a serious point – our catalyst system is very easy to use.”

By coincidence, the research comes exactly a century after Alfred Werner won a Nobel Prize for Chemistry for his work on the structures of transition metal complexes. As well, his PhD supervisor, Arthur Hantzsch, discovered the way to synthesise dihydropyridines.

“It has only taken 100 years to combine the work of doctoral adviser and student into one molecule,” Dr Colbran says.

A future aim is to try to convert the greenhouse gas, carbon dioxide, into the renewable fuel, methanol, much more efficiently.