Australia risks being left behind as the only country in the OECD without a national policy for science, technology or innovation, Professor Ian Chubb has told a capacity audience. VIDEO 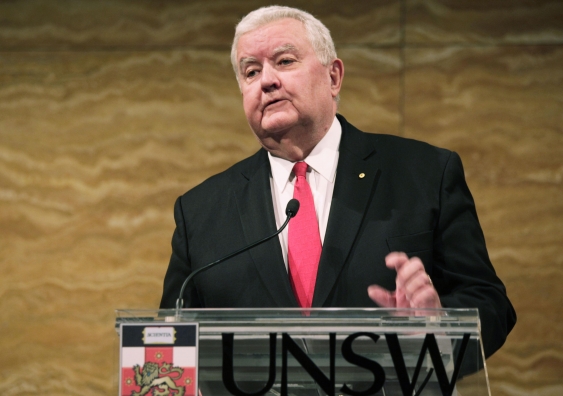 Australia risks being left behind as the only country in the OECD that does not have a national science and technology, or innovation policy, the Chief Scientist has told a capacity UNSW audience.

Delivering the 2014 Jack Beale Lecture on the Global Environment, Professor Ian Chubb called for action to secure the skills, investment and international alliances needed for a better future for the country.

In a speech titled No Free Rides to the Future, Shoring up the Science to Sustain Us, Professor Chubb also called for an end to the “she’ll be right” attitude, saying Australia did not punch above its weight in science “as we so often declare in a fit of misguided and unhelpful enthusiasm”.

While the country did well in its share of the world’s top 1% of cited research papers, its average citation rates were below that of 11 western European countries and the US and Canada, he said.

Australian primary and secondary school students were also only “in the middle of the pack” in terms of science and mathematics literacy.

“Our patenting rates are poor; and the linkages between our researchers and business are among the worst in the OECD. Less than one in three Australian researchers work in industry – half the OECD average of 60% and substantially less than the US,” Professor Chubb said.

“Bluntly, we are middle-of-the-road. I think it is no coincidence that we sit where we do."

Other countries were investing strategically in science “for the long haul”, and Australia needed to catch up.

“We can’t just continue to tinker at the margins. That’s what we have done and it is clear that it isn’t good enough.

“Australia must forge its path in step with the rest of the world. We must remain in the game with a differentiated and readily adaptable economy that supports the aspirations we have for the country. And we must ensure that we bequeath a planet that can sustain the coming generations.”

Professor Chubb said he will release his proposal for a national science strategy in Canberra on 2 September, with recommendations for improving competitiveness, education and training, research, and international engagement.

Two leading UNSW scientists – Dean of Science Professor Merlin Crossley, and Scientia Professor Michelle Simmons, Director of the ARC Centre of Excellence for Quantum Computation and Communication Technology – will also be at Parliament House that day.

They will join Professor Chubb and three others at a symposium discussing the role of science in Australia’s future, organised by The Conversation.

In his lecture, Professor Chubb praised the Hon Dr Jack Beale, Australia’s first Minister for the Environment (NSW Parliament), as a man ahead of his time.

“He was that rarest of combinations – a politician with a background in, and passion for, science ... He was a politician who thought about the future,” he said.