Research on how alcohol affects the behaviour of monogamous prairie voles is providing insights into sex differences in the brain functions of humans, writes Rob Brooks. 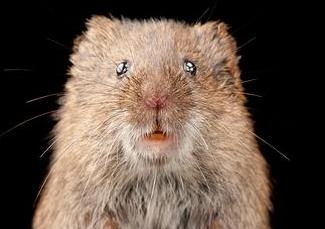 OPINION: How does alcohol consumption affect romantic life? Let me count the ways.

If popular advertising is to be believed, the consumption of high-end spirits almost guarantees a steady variety of glamorous amour. I was always surprised that James Bond – before Daniel Craig – opted to take his vodka martinis shaken rather than stirred. Bond was never short of anyone to stir his martinis.

From Dutch courage to a shared glass of champers to drunken would-rather-never-remember sex, alcohol’s tendency to reduce our inhibitions has changed the way drinkers meet and mate. But drinking is also a cause and a consequence of relationship breakdowns and considerable associated misery.

Which is why I’m fascinated to see how the world’s media covers a paper out today in the Proceedings of the National Academy of Science of the US (PNAS). It has an irresistible combination of clickbait-ready elements: a cute small mammal, booze and serious questions about monogamy.

The first element, the cute mammal, is the prairie vole, poster-child for wishful thinking anthropomorphising about monogamy and the power of love. Male-female pairs form long-lasting bonds, sleeping together, grooming one another and raising pups together.

The prairie vole looks even more virtuous alongside its shadier close relative, the montane vole, which tends to mate promiscuously and form no such pair bonds. Which means comparisons of the two species, from ecology to the molecular biology of receptors on the brain, can help resolve the mechanisms involved in prairie vole monogamy.

Early work on these species implicated the hormones vasopressin and oxytocin. Block their release in prairie voles, and they come over all promiscuous – just like montane voles. And it turns out the reward centres of prairie vole brains bustle with receptors for these hormones, but montane vole brains don’t. Decades of work on these closely related vole species have resolved, in considerable detail, the brain regions, receptors and molecules involved in regulating prairie voles' much-admired mostly monogamous ways. Last June even saw the 21st century’s dark magic – epigenetics – implicated in understanding the neuroscience of how prairie voles “fall in love”.

But like so many mythologised monogamous relationships, a dark secret stalks the prairie vole love story. Because the vole has a bit of a drinking problem.

Not only do voles “self-administer” in much the same way that I do when I mix a gin and tonic, they can also “influence the drinking patterns of a social partner” in exactly the same way I do when I make one for a friend or beloved. But instead of the taste sensation of Hendricks, tonic and a quarter lime, the little fuzzies opt for a 1:10 mix of ethanol and water. They prefer it to plain water.

With an eye for a compelling study, Allison M.J. Anacker and colleagues saw an opportunity to study how self-administered alcohol consumption affects social bonding and the neural mechanisms by which prairie voles form monogamous couples. The effects of alcohol, it turns out, differed between female and male prairie voles.

Huddling up together is a reliable predictor that a couple of voles are likely to mate. Male voles that drank alcohol during a period of cohabitation were as likely to huddle up with a strange female as with a sexually receptive partner. Males who drank only water strongly preferred the partner animal over a strange female. Alcohol, it seems, disrupted the males' tendency to behave like monogamous paragons of pair-bonded virtue.

Female voles that had been drinking alcohol, on the other hand, grew slightly more likely to huddle up to their partner and not a strange male. It seems that alcohol might enhance female pair-bonding at the same time as diminishing the male commitment to pair-bonding.

Detailed study of the voles' behaviour as well as, eventually, their brains, revealed that alcohol directly affected the brain structures responsible for pair bonding rather than exerting indirect effects by causing drowsiness or altering levels of aggression. Alcohol, drunk during cohabitation with a potential mate, seems to affect male and female brains and behaviour differently.

Of course humans aren’t voles. Deciding how much to infer about human behaviour from a study on some other organism always presents a tricky challenge. It would be far too much to infer that drinking influences human pair-bonding in exactly the same way as it does for voles. But it would be ignorant to imagine that voles can teach us nothing of value here.

Insights from voles have already led to intriguing findings about the roles of vasopressin, oxytocin and their receptors in human commitment to their romantic partners and families. Men with a particular form of the vasopressin receptor gene, for example, exhibit a suite of traits that suggest they don’t form the same deep pair bonds that other men form: they make less committed partners, suffer from more marriage problems, are more likely to be unfaithful mates and, as a result, their relationships don’t last as long.

Alcohol inhabits a prominent yet complex place in the social and sexual lives of many adults. It can enhance bonding, ease courtship and foster closeness. And it can both moderate and cause stress, dominance/control issues and violence. The issues surrounding alcohol are so important, and so pervasive, that they should not be oversimplified or narrowly construed.

For me the most interesting thing about the vole study is the sex-specific way in which alcohol influenced pair bonding and behaviour. The study of sex differences in brain anatomy and function is an area replete with controversy and contesting ideological claims. Here is an area in which the study of sex differences can transcend simplistic ideological bickering about sexism and gender-free wishful thinking. Surely understanding the ways in which environments, genes and brains interact – over questions as socially pressing and consequential as alcohol and family function – could potentially be harnessed to great effect.

Professor Rob Brooks is director of the Evolution and Ecology Research Centre at UNSW.