In a hard-hitting public lecture at UNSW, Dr David Suzuki has criticised the government’s policy on climate change and exhorted Australians to embrace renewable energy. 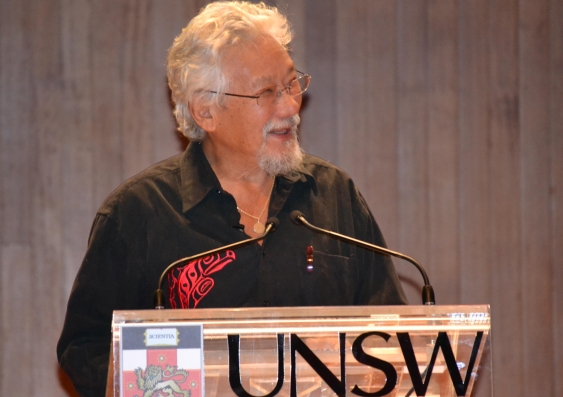 If we give nature a chance, nature will be far more forgiving than we deserve - David Suzuki

Dr Suzuki delivered the 2013 UNSW Jack Beale Lecture on the Global Environment to a packed audience on Saturday night on the topic: Imagining a sustainable future, foresight over hindsight.

He said the actions of the newly-elected federal government had led him to consider changing his talk’s title to “The Barbarians have Breached the Gates.”

Putting a price on carbon was by far the most effective way to get corporations and individuals to reduce their carbon footprint, he said. By moving to eliminate the carbon price, the Prime Minister, Tony Abbott, would make this a “politically toxic” issue in Australia for at least a decade.

“And this, of course, is just what corporations have wanted,” Dr Suzuki said.

He gave the example of Sweden as a country that has seen its economy grow strongly and greenhouse gas emissions fall sharply following the introduction of a price on carbon.

Dr Suzuki also criticised the new government’s decision to shut down the Climate Commission, an independent source of information on climate change. In Canada, those in power could be sued for “wilful blindness” if they suppressed or ignored vital information, he said.

“That is what Mr Abbott is doing by cancelling the commission, by firing Tim Flannery [its chief commissioner]. It is criminal negligence through wilful blindness,” he said.

He also blasted “outrageously rich people”, including Australian businesswoman, Gina Rinehart, for helping fund a “campaign of confusion” about the science of climate change. Many climate sceptics were funded by the fossil fuel industry, he said: “Follow the money and then ask: How credible are they?”

Dr Suzuki said the environmental movement had achieved enormous successes in the 1960s and 70s, but many of the battles fought then – such as stopping dam constructions or the drilling for oil in reserves – were back on the agenda.

“Environmentalism is a way of seeing our place within the biosphere. That’s what the battles were fought over. The barbarians – that is, many of the politicians and corporate executives that environmentalists have been fighting all these years – are driven by a totally different set of values, by the drive for profit, for growth and for power,” he said.

Australians had abundant sunlight and should use this “energy source of the future” to replace coal. With extreme bushfires, loss of half the coral cover of the Great Barrier Reef, and prolonged droughts, Australians should also be “at the ramparts” drawing the world’s attention to environmental problems.

“Mother Earth is giving you the signals in Australia, loud and clear,” Dr Suzuki said.

He said he still held out hope, however, that it was not too late to change the course of events. “I believe that if we give nature a chance, nature will be far more forgiving than we deserve,” he said before receiving a standing ovation.

Read the full lecture on The Conversation.

Floods cause feeding and breeding frenzy