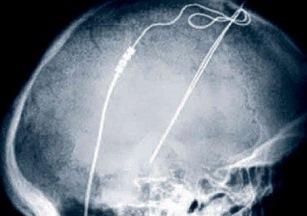 OPINION: Neurological disorders can have a devastating impact on the lives of sufferers and their families.

Symptoms of these disorders differ extensively – from motor dysfunction in Parkinson’s disease, memory loss in Alzheimer’s disease to inescapable cravings in drug addiction.

Drug treatments are often ineffective in these disorders. But what if there was a way to simply switch off a devastating tremor, or boost a fading memory?

Recent advances using Deep Brain Stimulation (DBS) in selective brain regions have provided therapeutic benefits and have allowed those affected by these neurological disorders freedom from their symptoms, in absence of an existing cure.

A pacemaker for the brain

Artificial cardiac pacemakers are typically associated with controlling and resynchronising heartbeats by electrical stimulation of the heart muscle.

In a similar manner, DBS sends electrical impulses to specific parts of the brain that control discrete functions. This stimulation evokes control over the neural activity within these regions.

Prior to switching on the electrical stimulation, electrodes are surgically implanted within precise brain regions to control a specific function.

The neurosurgery is conducted under local anaesthetic to maintain consciousness in the patient. This ensures that the electrode does not damage critical brain regions.

The brain itself has no pain receptors so does not require anaesthetic.

Following recovery from surgery the electrodes are activated and the current calibrated by a neurologist to determine the optimal stimulation parameters.

The patient can then control whether the electrodes are on or off by a remote battery-powered device.

Perhaps the most documented success of DBS is in the control of tremors and motor coordination in Parkinson’s disease.

This is caused by the degeneration of neurons in an area of the brain called the substantia nigra. These neurons secrete the neurotransmitter dopamine.

Deterioration of these neurons reduces the amount of dopamine available to be released in a brain area involved in movement, the basal ganglia.

Drug therapy for Parkinson’s disease involves the use of levodopa (L-DOPA), a form of dopamine that can cross the blood brain barrier and then be synthesised into dopamine.

The administration of L-DOPA temporarily reduces the motor symptoms by increasing dopamine concentrations in the brain. However, side effects of this treatment include nausea and disordered movement.

DBS has been shown to provide relief from the motoric symptoms of Parkinson’s disease and essential tremors.

For the treatment of Parkinson’s disease electrodes are implanted into regions of the basal ganglia – the subthalamic nucleus or globus pallidus, to restore control of movement.

These are regions innervated by the deteriorating substantia nigra, therefore the DBS boosts stimulation to these areas.

Patients can then switch on the electrodes, stimulating these brain regions to enhance control of movement and diminish tremors.

Recently, DBS has been used to diminish memory deficits associated with Alzheimer’s disease, a progressive and terminal form of dementia.

The pathologies associated with Alzheimer’s disease involve the formation of amyloid plaques and neurofibrillary tangles within the brain leading to dysfunction and death of neurons.

Recent clinical trials with DBS involve the implantation of electrodes within the fornix – a structure connecting the left and right hippocampi together.

By stimulating neural activity within the hippocampi via the fornix, memory deficits associated with Alzheimer’s disease can be improved, enhancing the daily functioning of patients and slowing the progression of cognitive decline.

Another use of DBS is in the treatment of substance abuse and drug addiction. Substance-related addictions constitute the most frequently occurring psychiatric disease category and patients are prone to relapse following rehabilitative treatment.

Persistent drug use leads to long term changes in the brain’s reward system.

Understanding of the reward systems affected in addiction has created a range of treatment options that directly target dysregulated brain circuits in order to normalise functionality.

One of the key reward regions in the brain is the nucleus accumbens and this has been used as a DBS target to control addiction.

Translational animal research has indicated that stimulation of the nucleus accumbens decreases drug seeking in models of addiction. Clinical studies have shown improved abstinence in both heroin addicts and alcoholics.

Studies have extended the use of DBS to potentially restore control of maladaptive eating behaviours such as compulsive binge eating.

In a recent study, binge eating of a high fat food in mice was decreased by DBS of the nucleus accumbens. This is the first study demonstrating that DBS can control maladaptive eating behaviours and may be a potential therapeutic tool in obesity.

Despite its therapeutic use for more than a decade, the neural mechanism of DBS is still not yet fully understood.

The remedial effect is proposed to involve modulation of the dopamine system – and this seems particularly relevant in the context of Parkinson’s disease and addiction.

DBS potentially has effects on the functional activity of other interconnected brain systems. While it can provide therapeutic relief from symptoms of neurological diseases, it does not treat the underlying pathology.

But it provides both effective and rapid intervention from the effects of debilitating illnesses, restoring activity in deteriorating brain regions and aids understanding of the brain circuits involved in these disorders.

Dr Amy Reichelt is a research fellow in neuroscience in the UNSW School of Psychology.

Putting it off: why we procrastinate