A better understanding of how lying evolves might help constrain the worst dishonesties in politics, public relations and propaganda, writes Professor Rob Brooks. 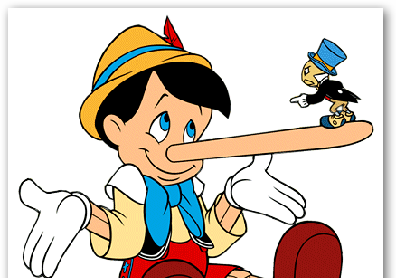 Pinocchio, whose nose grew longer when he lied, as portrayed by Disney

Ultimately, our ability to convincingly lie to each other may have evolved as a direct result of our cooperative nature.

Thus concludes the abstract of a new paper in the journal Proceedings of the Royal Society B that considers the evolution of “tactical deception” using a theoretic model and a comparative study of primates.

I’m interested to see how the news media handle this paper. Because the main conclusion – that lying is a way of exploiting others' cooperative behaviour – seems awfully obvious. But I suspect the true value of today’s paper is a bit more nuanced.

Many species – most notably our own – have evolved quite extraordinary capacities to cooperate. We might take cooperation as an obvious facet of life, but long-term cooperative gain requires a willingness to put aside narrow self-interest in the short term. And that doesn’t evolve easily.

Cooperation makes it possible for some individuals to cheat, prospering off the cooperative efforts of others. Cooperate too readily and you might get taken for a ride. Cooperate only grudgingly and you don’t reap the benefits of working together.

Evolutionary biologists and economists find that even the simplest models of cooperation – such as the prisoner’s dilemma game, explained in the video below – can lead to complex rules about when an individual should cooperate and when it should try to cheat.

Peer into the natural world, and the range of possible behavioural patterns that have evolved to fetter cheating and allow cooperation to flourish becomes even more complex.

In some species individuals reciprocate directly. Well-fed vampire bats regurgitate blood meals for starving bats that have helped them avoid starvation (also by regurgitating) in the past. Others reciprocate less directly.

And in many animal societies, including bees, ants and naked mole rates, transgressions get punished and cooperative behaviour rewarded.

Humans do all these things too. They also share information – like gossip – and prefer to cooperate with those who have good reputations. This makes human cooperation almost infinitely complex.

Anthropologists go to great lengths to understand how reputations are earned and regulated. In one recent study a team embedded itself in a Dominican village for nearly two years and counted the number of prosocial acts each person engaged in, and how many people they helped.

To be precise, Luke McNally and Andrew L. Jackson of Trinity College in Dublin model the evolution of “tactical deception”, or “the misrepresentation of the state of the world to others”.

Rather than simply cheating – trying to gain from another’s cooperative behaviour without behaving cooperatively yourself – this model adds another way of operating. By misleading the other individual, one can trick that individual into cooperating.

In looking for an example, I keep returning to perhaps the only memorable line from Ricky Gervais' otherwise forgettable film The Invention of Lying: “The world’s gonna end unless we have sex right now!”.

In The Invention of Lying, Mark Bellison (Gervais' character) does so well out of his novel ability to lie precisely because the cooperative nature of the lie-free society he inhabits. Lying about the world in order to cheat works well if liars don’t get too common or too brazen. If they do, the whole cooperative edifice collapses.

NcNally and Jackson back up their modelling work with an analysis of primate species in which they show the more cooperative species also have higher rates of deception. It is the cooperation itself that permits the evolution of the liar.

This paper might seem a little obvious and more than a little simplistic. It certainly does to me. But models of this nature do a great service by putting our intuitions to the test. And they can later be developed and elaborated to illuminate more difficult questions.

I would like to see if it can help us understand the fine-scale tensions between cooperation and dishonesty in human affairs. There is a lot more to lying than simply misrepresenting the world.

The liar often deceives him or herself as well – possibly in order to put a more convincing gloss on the lie.

Neuroscientist Sam Harris recently published Lying, a short e-book arguing we can both simplify our own lives and build better societies by telling the truth in situations when we might be tempted to lie.

Harris doesn’t just mean the whoppers typical of fraudsters, philanderers and politicians. He is especially concerned with the “white” lies that many of us tell in order to spare others discomfort and the corrosive effects they have on societies.

He seems to be advocating we try to build a lie-free world, such as the one in The Invention of Lying. But his suggestions go beyond a hopeful “We’d all be better off if we just told the truth. Mmmkay?”.

Harris gets bottom-up processes and the conflict between individual benefits and group functioning. His book is worth a read for his impassioned argument that each of us, as individuals, would benefit from resisting the urge to lie.

I’m not convinced. What would help right now is some theoretic and empirical evidence that showed the conditions under which Harris' prescriptions might work. And that’s the beauty of papers like today’s one from McNally and Jackson.

Irrespective, a better understanding of how lying evolves, no matter how simple, might do enormous social good.

For one thing it might help constrain the worst dishonesties in politics, public relations and propaganda.

Professor Rob Brooks is director of the Evolution and ecology Research Centre at UNSW This article was originally published at The Conversation. Read the original article.