Fastest sperm may not be the best

For sea squirts the key to a long and happy life is to be fertilised not by a fast sperm, but by one that stands the test of time, a study has revealed. 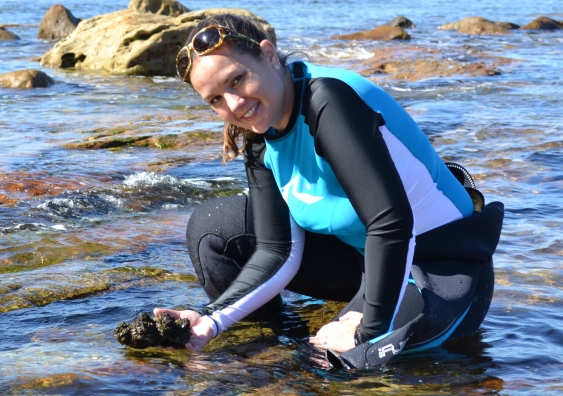 Dr Angela Crean with a sea squirt at Long Bay

For sea squirts the key to a long and happy life is to be fertilised not by a fast sperm, but by one that stands the test of time, a study has revealed.
The research By Dr Angalea Crean, of the UNSW School of Biological, Earth and Environmnetal Sciences also shows for the first time that the influence of sperm extends well beyond the moment of conception. If further studies demonstrate the same effects occur with human sperm, the finding will change some of the assumptions used in IVF practice.
Sea squirts are small animals that live on the sea floor – including in and around Sydney Harbour. They attach themselves to rocks, piers, and ships and filter the surrounding water for their food. They are chordates – more closely related to humans and other vertebrates than to invertebrates such as sponges and coral.
Male and female sea squirts (Styela plicata) breed by broadcast spawning. Large numbers of eggs and sperm are released into the water, with the sperm immediately racing towards their targets. Fertilisation can occur within minutes, or within hours.
Dr Crean's research revealed a remarkable fact. Eggs penetrated within minutes by speedy sperm tended to be either non-viable, or produced larvae which died young. The strongest, fittest, longest-lived sea squirts were those fertilised by sperm which swam for about an hour before reaching the egg.
“This is surprising because it suggests that a sperm’s influence on offspring extends beyond just the DNA it carries,” she says.
“This finding has the potential to change the way we view and study inheritance. It is unknown how widespread this phenomenon is but, given the obvious implications for IVF technologies, it will be exciting to test if sperm and offspring quality are linked in other species.”
Until now, the standard model of reproduction assumed that the influence of a sperm ended at the moment it transferred the male genome into an egg. The sea squirt study suggests that other characteristics of an individual sperm – in addition to the genes – can exert lifelong influence.
“The reproductive mode of the sea squirt is obviously very different to the human one, so you cannot draw any direct comparisons,” says Dr Crean, who is an ARC DECRA fellow.
“But it’s an area that could be looked at to improve outcomes. In human assisted reproduction there are a lot of early embryonic deaths, and differences in sperm characteristics could be one factor influencing that.”
If further studies show the same effects in human sperm, it will be a very valuable finding for the increasingly popular assisted reproduction method known as intracytoplasmic sperm injection (ICSI). This method involves injecting a single sperm directly into an egg – and it might just turn out that the best sperm for the job is the slowest and easiest to catch.
The research was published in PLoS One  last year and presented as part of the Fresh Science program, a national scheme sponsored by the Australian Government through the Inspiring Australia initiative to teach early career scientists how to present their research well to a general audience and to the media.
Dr Crean is one of twelve national winners.
Media contacts.
Angela Crean:  a.crean@unsw.edu.au
UNSW Science media: Deborah Smith, 9385 7307, 0478 492 060; deborah.smith@unsw.edu.au
Twitter Facebook LinkedIn