From the field: Continental shift 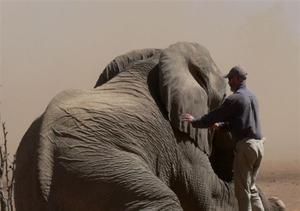 Keith Leggett tagging one of his research subjects

He spoke to Louise Williams for UNSW's Uniken magazine.

How did a marine chemist become interested in elephants?

It is not as strange as it might seem. In one of my first jobs I was working at a remote research station in Zimbabwe studying the chemistry of Lake Kariba. The only things that wandered past during the day were elephants and at night elephants trashed our camp and kept themselves busy destroying the tree outside my house. I became fascinated by the fact elephants will live in such close association with people and really not care, when most animals will avoid people at all costs.

There’s also another connection. The elephant’s closest relatives are the dugong and manatee. Elephants’ evolutionary history shows they emerged from the water, evolved on land, and then went back into water before getting out again some 3–5 million years later – and they still have a great affinity for water.

What aspect of African elephants did you research?

I started looking at how elephants and people interact so we could understand how elephants could survive into the future. Outside national parks this can only be achieved if elephants and local communities can live together and use the land sustainably.

We did lots of movement studies to determine the range of elephants and how quickly they are reproducing because these are the two key factors for sustainable populations. African elephants weigh about 7,500 kilograms and traverse huge areas to feed themselves; my longest range elephant moved over a 15,500 square kilometre area.

This work was in Namibia where the elephant population had been decimated during a civil war, so initially they were very scared of people. At first, I would get charged every day but elephants are smart and once they realise there is no danger they become habituated to humans.

How are elephants doing in Africa?

Their populations in some areas (particularly southern Africa) are recovering. The peak population prior to European colonisation was probably about three million. Then ivory became “white gold” and colonial-era hunting and trading meant the population crashed to perhaps only 5,000, before diamond and goldmining diverted the profiteers. Now there are approximately 685,000 elephants across Africa, though this estimate varies.

What is it like working in the field in Africa?

My day job is at UNSW’s Arid Zone Research Station, which is more than 100 kilometres from the nearest shop and about as hot, and often even drier, than southern Africa; so for me there’s not much culture shock.

In Botswana where my two students will spend two years, the temperature is moving up towards 45°C. It’s the end of the dry season and everyone and everything is just sitting in or under the trees, not moving. Then nature turns on a tap for three months, then just as suddenly the rain stops. It’s not unlike inland Australia – however, remote Africa comes with additional practical challenges like needing to know how to fix your own car.

What are your students studying?

They are different, but interrelated research areas. Tempe Adams is studying elephant and human interaction to continue working on sustainable population models for elephants living outside national parks. Kylie McQualter is studying giraffes. As elephants are recovering giraffe populations are crashing. There are only about 141,000 giraffes across Africa now. Giraffes are very shy and they seem to be unable to compete effectively for resources, but we need to know a lot more.

These two studies are the first out of UNSW, but I hope it’s the beginning of a steady stream.

Celebration of Science and Art at Fowlers Gap Research Station