UNSW researchers have identified Australia’s most important wetlands for waterbirds, following one of the most extensive aerial surveys of its kind in the world. 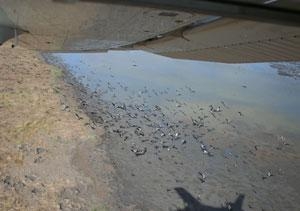 UNSW researchers have identified Australia’s most important wetlands for waterbirds, following one of the most extensive aerial surveys of its kind in the world.

Teams of observers in light aircraft surveyed 4,858 wetlands across Australia during October-November 2008: a subsequent analysis released today by the National Water Commission reveals an estimated 4.6 million waterbirds of more than 100 species across these wetlands.

“This is the first time in Australia that we have attempted a national audit of the value of our wetlands for waterbirds,” says lead author, Professor Richard Kingsford, Director of the Australian Wetlands and Rivers Centre at UNSW.

“Wildlife information is seldom collected at a national scale, unlike demographic and economic statistics on people and economies. We can now make some relative comparisons about the importance of different wetlands across the continent, which will help long-term decision-making about water resource management and conservation.”

The survey, supported by all State and Territory governments and funded by the National Water Commission, represents a significant portion of all Australia’s wetlands. It found that relatively few of them supported large numbers of waterbirds (more than 10,000) and that the top 20 wetlands held about 40% of all waterbirds.

“This provides management authorities with an excellent opportunity to measure long-term changes for waterbird communities, using the most important subset of wetlands,” says Professor Kingsford. “Many of them are already identified as important under the Ramsar Convention, for which governments have reporting responsibilities.”

Wetlands with extremely high concentrations of waterbirds (between 30,000 and 300,000) were found in northern Australia, Western Australia, central Queensland and western NSW.  These included the WA sites of Eighty Mile Beach and Roebuck Bay on the north-west coast, Lake Gregory south of Halls Creek, Lake Argyle near Kununurra, and Lake MacLeod on the mid-west coast; the South Australian site of the Lower Lakes and the Coorong at the mouth of the Murray River; and the Northern Territory site Nanjbagu Billabong, in Kakadu.

“These wetlands are our crown jewels for conservation; they are every bit as spectacular as other better known wetlands overseas,” says Kingsford. “Everyone knows about the Kakadu wetlands, but we others were equally magnificent.” In addition, the team analysed long-term changes in waterbird numbers, using annual data collected during aerial surveys of eastern Australia. They found long-term declines, although the recent floods have provided evidence of some recovery.