A project to develop low-tech fish farming systems in Papua New Guinea is providing a new source of cheap food and income for thousands of people. 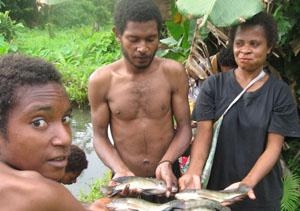 This age-old adage best sums up the philosophy behind a new project developing cheap, low-technology farming practices for the community in Papua New Guinea.

He says the high cost of meat and dependency on canned products makes fish farming an ideal solution for a country that has an unemployment rate of 80 per cent.

“In most parts of Papua New Guinea, people have limited access to protein in their diet, which obviously has health implications. Farming fish is important for food and income security,” explains Sammut, from the School of Biological, Earth and Environmental Sciences, who’s collaborating with a team of researchers, technicians and aquaculture officers from partner agencies in PNG.

Increased protein consumption from fish makes medical treatments for HIV/AIDS more effective. The project has links to the HIV/AIDS programs in PNG and also coordinates extension programs in schools and prisons. Teaching prisoners how to farm fish gives them an opportunity to earn income when they are released into the community.

“Our training programs are building capacity in the school system, prison and wider community. The research also involves the community and this helps with the adoption of the technologies,” he says.

The program builds on past work by PNG’s National Fisheries Authority, the primary partner agency on the project which has been funded by the Australian Centre for International Agricultural Research.

While the project is in its early stages, there have already been signs of improvement, says Sammut.

An unexpected social benefit of the program has been the decrease in tribal warfare – a serious concern in certain parts of the country – as more tribal warriors direct their efforts towards fish farming.