In the footsteps of Mawson

Professor Chris Turney will deliver the year's first Brainfood public lecture and announce plans for an expedition to Antarctica to retrace the footsteps of the great scientist and explorer Sir Douglas Mawson. 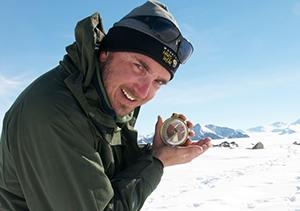 Antarctica remains one of the last, great, unexplored regions on Earth. It’s also a unique place to monitor the health of our planet.

UNSW researchers are launching their own modern-day adventure to Antarctica, retracing the footsteps of the great scientist and explorer Sir Douglas Mawson in the centenary year of his famous Antarctic expedition.

Professor Chris Turney, an Australian Research Council Laureate Fellow in Climate Change at UNSW, with a team of 45 colleagues and members of the public, will set out in November from Hobart on a privately funded voyage of discovery south.

The new Australasian Antarctic Expedition, dubbed the Spirit of Mawson, will repeat as many of the original team’s measurements as possible, making observations of the oceans, wildlife, weather, geology and ice cover.

Join Professor Turney as he announces the expedition plans, as well as his latest research and scientific insights, having recently returned from a five-week research mission to Antarctica.

The 2013 BrainFood Series is presented by UNSW Alumni Relations.

What: Brainfood free public lecture – In the Footsteps of Mawson: Antarctic Science and Adventure in the 21st Century, delivered by Professor Chris Turney

Why remote Antarctica is so important in a warming world