The unique scientific features of Fowlers Gap Arid Zone Research Station were showcased, and a new artists' studio opened, during a recent visit by senior staff to the remote UNSW property near Broken Hill. 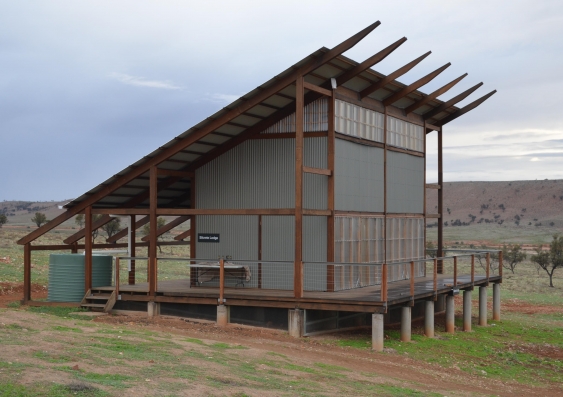 It is the site of a remarkable rainfall record spanning more than 40 years, the only place where scientists study zebra finches – the bird equivalent of lab rats – in the wild, and the land where much of what we know about kangaroos was discovered.

These unique scientific features of Fowlers Gap Arid Zone Research Station were showcased during a recent visit by senior staff to the remote UNSW property near Broken Hill in western NSW.

A studio was also launched for artists inspired by the station’s dramatic landscape, with its rocky ranges, saltbush flats and creeks filled with red gums.

He thanked philanthropists Julian and Annie Beaumont, who were present at the ceremony, for their generous financial gift which made its construction possible. “This is a truly phenomenal building,” Professor Field said.

Mr Beaumont said he hoped it would be a place where artists can free their minds of European constraints and reflect deeply on the ancient landscape and indigenous history of the site.

“Art and science have been unified here for many thousands of years and we’re pleased to be contributing to this tradition,” he said.

Fowlers Gap is the only research station in the arid zone of New South Wales, and UNSW holds a lease in perpetuity on the property, which is an important site for teaching as well as research.

Professor Iain Martin, Deputy Vice-Chancellor (Academic); Professor Merlin Crossley, Dean of Science; and Professor Ross Harley, Dean of the College of Fine Arts were among the UNSW visitors who toured the station on Friday 9 May and listened to a range of scientific presentations.

The second edition of Emeritus Professor Terry Dawson’s seminal book, Kangaroos, which explores the biology, ecology and social behaviour of these iconic animals, was launched.

“Australians take kangaroos for granted. But they really are special animals,” said Professor Dawson, who has carried out research at Fowlers Gap for more than 50 years. The site is unique in having four types of kangaroos living there – Western Greys, Eastern Greys, Reds and Euros.

His research shows that kangaroos are one of the most athletic mammals. Their fast hopping speeds rely on the facts that muscle makes up 50 per cent of their body mass, and their muscles have exceptionally high levels of mitochondria - the energy-generating parts of cells.

These studies provide unique insights into cooperative behaviours, such as how some chestnut-crowned babblers forgo breeding to help raise the offspring of others in the group.

Zebra finches are studied by many researchers overseas under laboratory conditions. “But Fowlers Gap is the only place in the world where people are working on wild zebra finches,” Associate Professor Griffiths said.

Rainfall measurements have been collected at 17 sites on the Fowlers Gap property since the 1970s, and are now readily accessible to researchers. “This is an incredible achievement of international significance in the hydrology world,” said Professor Ian Acworth, of the UNSW Connected Waters Initiative Research Centre.

A network of 12 bores have recently been installed on the property to study how rainfall recharges underground aquifers, as part of $15 million UNSW-led project to provide groundwater-related infrastructure across the continent.

The manual rainfall gauges on the property have also been replaced with modern gauges that are monitored remotely using the Telstra 3G network. And video cameras and flow gauges have been installed on two creeks to monitor flood events.

“On 28 March 2014, Fowlers Gap Creek reached a depth of more than 2 metres in less than 15 minutes,” Professor Acworth said. "By 6 April, the ducks had already moved in."

Kangaroos use tail as fifth leg

Celebration of Science and Art at Fowlers Gap Research Station