A UNSW-led team of Australian researchers who succeeded in growing cloned embryos containing the DNA of an extinct frog has been named in Time magazine’s top 25 inventions for 2013. 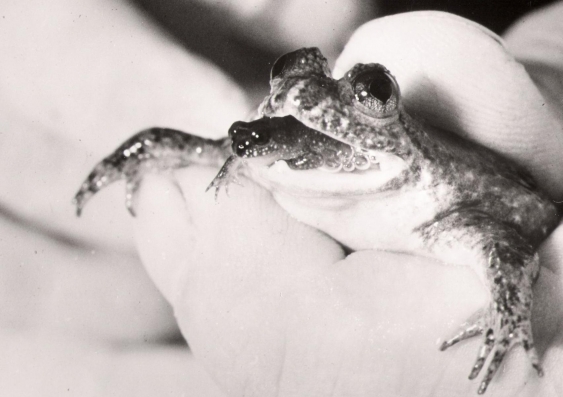 A UNSW-led team of Australian researchers who succeeded in growing cloned embryos containing the DNA of an extinct frog has been named in Time magazine’s top 25 inventions for 2013.

The Lazarus Project – a “de-extinction” project aimed at bringing the Australian gastric-brooding frog back to life – is the only Australian project on the worldwide list. Other inventions include a driverless toy car, a new atomic clock, and an artificial pancreas.

The bizarre gastric-brooding frog, Rheobatrachus silus, which became extinct in 1983, swallowed its eggs, gestated its young in its stomach, and then gave birth through its mouth.

They used cells from frog tissue that had been stored for more than 30 years in a conventional deep freezer. They then applied a technique called somatic cell nuclear transfer, in which the nuclei of dead cells from the extinct frog were placed into the eggs of a related species of living frog, to produce the early stage embryos.

Although none of these frog embryos survived beyond a few days, genetic tests confirmed that the dividing cells contained the genetic material from the extinct frog.

Professor Archer says he is confident that the barriers to reviving a gastric-brooding frog are technical, rather than biological.

"De-extinction represents a new, potentially very important conservation tool to optimise biodiversity in the world. It is not an alternative or a threat to more conventional conservation programs," he says.

Cross-species cloning techniques could help secure currently endangered species, by using common species to build up the numbers of their endangered relatives. It could also bring back potentially keystone species whose absence threatens the stabilty of an ecosystem, he says.

According to Time magazine, great inventions are those which solve problems that people didn’t think they could solve, or problems they didn’t even know they had.

Among the most fun are alcoholic coffee and a cronut – a croissant-style pastry that is fried like a donut. Among the “world-changing” inventions are waterless fracking, the X-47B drone developed by the US Navy and an exoskeleton for paraplegics.

The Lazarus project was placed 19 out of 25 – in the “major deal” category.