Fully renewable electricity could be competitive

A carbon price of between $50 and $100 per tonne would make coal-fired and gas-fired power less economical than renewable electricity, a UNSW study shows. 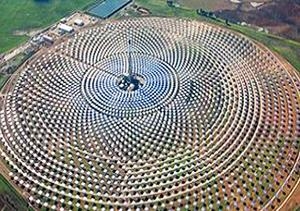 A carbon price of between $50 and $100 per tonne of carbon dioxide would make coal-fired and gas-fired power less economical than renewable electricity, a UNSW study shows.

Associate Professor Mark Diesendorf, of the Institute of Environmental Studies at UNSW, said all fossil-fuelled power stations in Australia’s National Electricity Market could be phased out and replaced economically and reliably with commercially available renewable energy technologies by increasing the carbon price to this “medium” level.

“This carbon price range is considerably less than Treasury estimates for measures that would achieve far less in terms of cutting greenhouse gas emissions,” he said.

The results of the peer-reviewed study by an interdisciplinary team at UNSW are to be published in the journal Energy Policy. The researchers are Dr Diesendorf, Ben Elliston, of the School of Electrical Engineering and Telecommunications, and Dr Iain MacGill of the Centre for Energy and Environmental Markets.

To obtain their results, the team performed thousands of computer simulations using actual hourly data on electricity demand and matching this with hourly input from solar and wind power for the year 2010.

The simulations compared the optimal economics of a 100 per cent renewable electricity system with that of a hypothetical, new replacement, conventional system based on the more efficient coal and gas-fired power stations than are in use today in Australia.

All the technologies, both renewable and fossil, used in the simulations are commercially available now.

The researchers used the conservative technology costs projected to 2030 by the Bureau of Resources and Energy Economics.

“We found that the minimum 2030 costs of the reliable renewable energy system were achieved with a large contribution from wind power: from 46 to 59 per cent of annual electricity generation,” said PhD candidate and lead author, Ben Elliston.

“Solar photovoltaic, and concentrated solar thermal electricity with thermal storage, were equal second in their contributions to annual electricity generation - typically 15 to 20 per cent each. Existing hydro and gas turbines burning biofuels made small but vital contributions by filling gaps in wind and solar generation.”

Dr Diesendorf said the comparison of the renewable energy system with a so-called efficient system of coal and gas-fired power stations was done to get a feeling for the relative costs involved.

“Despite the fact that most of the electricity generation in our scenarios comes from the fluctuating sources of wind and solar photovoltaic, the least-cost renewable energy systems as a whole were just as reliable as conventional systems.

“There is no need for any inflexible base-load power stations. We can balance fluctuating renewable energy sources with flexible power stations, such as hydro, gas turbines and concentrated solar thermal power with thermal storage,” he said.

Renewable energy - the future for Australia