An extinct species of a carnivorous platypus about a metre long – the largest platypus ever found – has been discovered in the famous Riversleigh World Heritage Area by UNSW researchers. 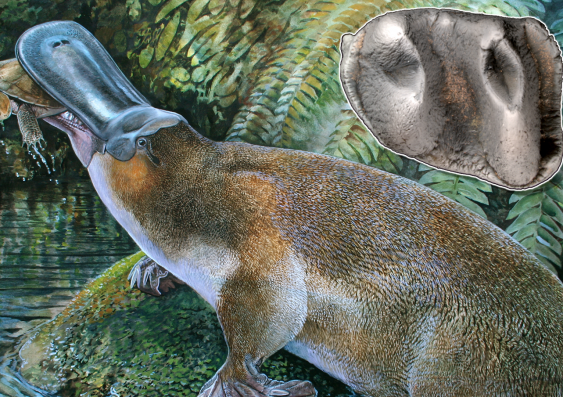 An extinct species of carnivorous platypus about a metre long – the largest platypus ever found – has been discovered in the famous Riversleigh World Heritage Area of Queensland.

Unlike the living species, it had fully functional teeth that may have been used to kill and consume a wide range of animals that lived alongside it in ancient pools and lakes.

The new species, named Obdurodon tharalkooschild, has been identified from a highly distinctive tooth found in a deposit that has not been dated yet, but is likely to be between 15 and 5 million years old.

The discovery was made by Rebecca Pian, a PhD candidate at Columbia University and former UNSW Honours student, and Professor Mike Archer and Associate Professor Suzanne Hand, of the UNSW School of Biological Earth and Environmental Sciences.

Their study is published in the Journal of Vertebrate Palaeontology.

“A new platypus species, even one that is highly incomplete, is a very important aid in developing understanding about these fascinating mammals,” says Ms Pian, the lead author.

Based on the size of its tooth, it is estimated that the extinct species would have been twice the size of the modern platypus.

“Like other platypuses, it was probably a mostly aquatic mammal, and would have lived in and around the freshwater pools in the forests that covered the Riversleigh area millions of years ago,” says UNSW’s Associate Professor Hand.

“Obdurodon tharalkooschild was a very large platypus with well-developed teeth, and we think it probably fed not only on crayfish and other freshwater crustaceans, but also on small vertebrates including the lungfish, frogs, and small turtles that are preserved with it in the Two Tree Site fossil deposit,” she says.

Before the discovery of the new species, the fossil record suggested that only one species inhabited the Earth at any one time, with platypuses becoming smaller and the size of their teeth reducing through time.

“Discovery of this new species was a shock to us because prior to this, the fossil record suggested that the evolutionary tree of platypuses was a relatively linear one,” says UNSW’s Professor Archer.

“Now we realize that there were unanticipated side branches on this tree, some of which became gigantic.”

Toothed platypuses, Monotrematum sudamericanum, were present in South America until 61 million years ago. The oldest fossil platypus found in Australia was a small, toothed species, Obdurodon insignis, from 26 million-year old lake deposits in what is now the Simpson Desert.

A larger species, Obdurodon dicksoni, was found in 19 to 15 million year old deposits at Riversleigh, and the remains include the only known fossil platypus skull.

Obdurodon tharalkooschild is the second platypus species unearthed at Riversleigh.

Obdurodon comes from the Greek for “lasting (obdurate) tooth” and was coined to distinguish extinct toothed platypuses from the essentially toothless modern species.

Tharalkooschild honours an Indigenous Australian creation story about the origin of the platypus. In the Dreamtime, Tharalkoo was a head-strong young female duck. Her parents warned her not to swim down river because Bigoon, the water-rat, would have his wicked way with her.

Scoffing, she disobeyed her parents and was ravished by Bigoon. By the time Tharalkoo escaped and returned to her family, the other girl ducks were laying eggs, so she did the same.

But instead of a fluffy little duckling emerging from her egg, her child was an amazing chimera that had the bill, webbed hind feet, and egg-laying habit of a duck, along with the fur and front feet of a rodent—the first platypus.