How the Pacific Ocean leaks

A state-of-the-art ocean model has been used to conduct the first detailed investigation of oceanic water flow between the Pacific and Indian Oceans. 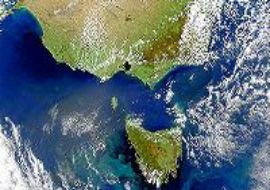 The oceanic bottleneck south of Tasmania is the second-largest link between the Pacific and Indian Oceans (image: NASA).

A state-of-the-art ocean model has been used in a new study to conduct the first detailed investigation of oceanic water flow between the Pacific and Indian Oceans via the south of Australia.

This so-called Tasman leakage is the second-largest link between the Pacific and Indian oceans after the Indonesian through-flow to the north of Australia, researchers from the UNSW Climate Change Research Centre (CCRC) and CSIRO report in the journal Geophysical Research Letters.

Water travels through the world's oceans along great loops driven by massive and often deep currents in a process known as the global thermohaline circulation, notes the study's lead author, Dr Erik Van Sebille, a physical oceanographer at the CCRC.

Because the Tasman leakage acts as a bottleneck in the Pacific-to-Indian flow, changes in this pathway can have significant impact on the global thermohaline circulation.

Additionally, the Tasman leakage could also have a direct effect on both the regional Australian climate and the availability of nutrients in the waters of theGreat Australian Bight, which in turn could affect marine ecosystems in these areas.

Better understanding of this bottleneck in the global ocean has the potential to improve the accuracy of climate predictions.

Using a high-resolution ocean circulation model (OFES) to trace individual water parcels, the researchers were able to determine how much of the water flowing in the East Australia Current eventually ends up in theIndian Ocean.

According to the model, most of the water that runs southward along the coasts of Queensland and New South Wales veers east before reaching Bass Straitand stays within the Pacific Ocean.

The remaining fraction comprising the Tasman leakage continues flowing south, rounds Tasmania and then flows west through the Great Australian Bight until it reaches Cape Leeuwin and enters the Indian Ocean.

The study showed almost half the Tasman leakage is carried within large eddies. These vortices, which can be hundreds of kilometres in diameter, are common oceanic phenomena known to be capable of trapping water and transporting it over huge distances.

Surprisingly, the research found the majority of the water traversing this route is carried by small-scale filaments and slow background currents rather than the giant eddies.

Until now, the giant eddies were thought to be the primary drivers of flow through the Tasman leakage.

The analysis also found the size of the Tasman leakage varied considerably over time on both weekly and yearly scales, with the amount of water flowing from the Pacific to the Indian Ocean reduced to almost zero in some years.

Dr Van Sebille and colleagues are now planning to investigate how this dynamic Pacific-to-Indian Ocean connection affects both global and regional climate and the influence it has over the marine ecosystem south of Australia.