Kangaroos use tail as fifth leg

Kangaroos may be nature's best hoppers, but when they are grazing on all fours – which is most of the time – their tail becomes a powerful fifth leg. 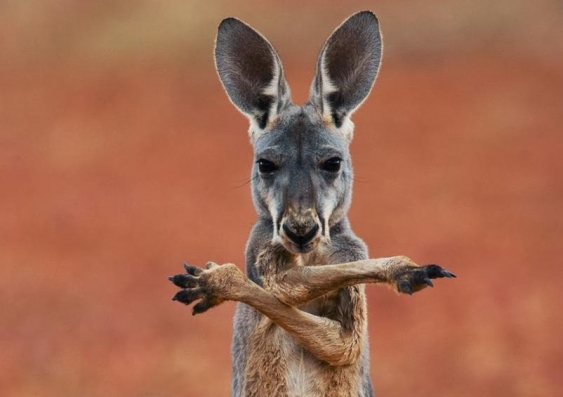 Kangaroos may be nature's best hoppers, but when they are grazing on all fours – which is most of the time – their tail becomes a powerful fifth leg, new research shows.

While such activity appears awkward, it turns out that the tails of red kangaroos provide as much propulsive force as their front and hind legs combined, as they eat their way across the landscape.

The new study, published in Biology Letters, is by an international team that includes UNSW’s Emeritus Professor Terry Dawson, who has studied kangaroos at the university’s Fowlers Gap Arid Zone Research Station near Broken Hill for more than 50 years.

The study was led by researchers at the University of Colorado, Boulder, in the US, and the Simon Fraser University in Burnaby, Canada.

"Kangaroos are really special mammals. Work over the past half century has turned the notion that they belong to an inefficient, primitive group of mammals totally on its head,” says Professor Dawson.

Red kangaroos are the largest of the kangaroo species in Australia. When grazing on grasses, they move both hind feet forward as a pair, while using their tails and front limbs together to support their bodies.

For the study, the team videotaped five red kangaroos in Professor Dawson's Sydney laboratory that had been trained to walk forward on a force-measuring platform with Plexiglas sides.

The platform's sensors measured vertical, backward and forward forces from the legs and tails of the animals.

"We found that when a kangaroo is walking, it uses its tail just like a leg," says study co-author, Associate Professor Maxwell Donelan of Simon Fraser University.

"They use it to support, propel and power their motion. In fact, they perform as much mechanical work with their tails as we do with one of our legs."

Study co-author, Associate Professor Rodger Kram of the University of Colorado, says: “We went into this thinking the tail was primarily used like a strut, a balancing pole, or a one-legged milking stool. What we didn't expect to find was how much power the tails of the kangaroos were producing. It was pretty darn surprising."

Professor Dawson says the muscles in the tail and hind legs are highly aerobic, with a lot of mitochondria – the power houses in cells that provide energy. The muscles of the front legs, however, have few mitochondria.

“They're not organised for propulsion, so instead of the tail being the strut, the front legs were filling that role," he told ABC Science.

“I can now understand where that energy goes and why, if they're going to walk more than 5 metres, they get up and hop instead."

He says the team is interested in mechanical analogues to walking and locomotion: "There's interest in the robotic side of things and how other forms of locomotion can work.”