Two tiny fossils are prompting an overhaul of theories about marsupial evolution after they revealed unexpected links to South America - and possibly Africa. 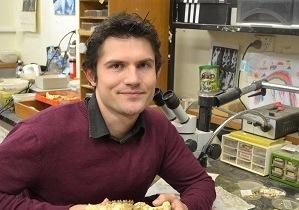 Two tiny fossils - an ankle bone and a tooth - are prompting an overhaul of theories about marsupial evolution after they revealed unexpected links to South America - and possibly Africa.
One of the fossils, found at the Tingamarra site in south-eastern Queensland, is a 55 million-year-old ankle bone from a mouse-sized marsupial previously known only from South America.
The second is a tooth, which derives from a formerly unknown species that shows similarities to fossils found in South America and, surprisingly, North Africa.
The two fragments are set to overturn the conventional theory about the evolution of marsupials, which holds that there was a single migration from the part of the Gondwana 'supercontinent' that became South America to the part that became Australia.
"The origins of Australian marsupials suddenly got a lot more complicated," says UNSW palaeontologist Dr Robin Beck, an ARC DECRA postdoctoral fellow.
"All the species of modern day marsupials here are quite closely related. The species represented by the ankle-bone belongs to an entirely different group - a group that we know lived in South America but, up until now, we thought never made it to Australia.
"The tooth is more of a mystery: are its origins in South America, Africa or somewhere else?
"It is impossible to explain the presence of these new fossils in Australia using the single dispersal model. Instead, there may have been multiple movements of marsupials between South America and Australia."
Because the fossil tooth comes from a species previously unknown to science, Dr Beck had the honour of formally describing and naming it. His paper on the subject has been accepted for publication this year in the journal Acta Palaeontologica Polonica.
"I've named it after one of my colleagues, Henk Godthelp, who has led research at Tingamarra together with Mike Archer and Sue Hand," he says.
"Henk's nickname is 'The Old Bastard', so I've called the species Archaeonothos henkgodthelpi, which translates, roughly, to 'the ancient illegitimate of Henk Godthelp'. The name also implies the species is unrelated to other Australian marsupials."
The similarities between the fossil tooth and those of an extinct species recorded in Tunisia remain the tantalising subject of further research. For the moment, though, Dr Beck thinks the tooth and the ankle-bone - which he described in the German journal Naturwissenschaften - provide fascinating new information about the history of marsupials in Australia.
"They mean that extinction has played a much bigger role in the story than we previously thought," he says.
"Some species became extinct in Australia but survived in South America. And perhaps the opposite is also the case - will there be discoveries in South America of typically 'Australian' fossils?"
Dr Beck says climate change might have played a role in the disappearance of the 'ameridelphian' marsupials. The Tingamarra fossil deposits date from 55 million years ago, when the climate was very warm. "It would have been lush rainforest," he says. "Since then, the climate in Australia has been gradually cooling."
Dr Beck is one of 12 early-career scientists unveiling their research to the public for the first time thanks to Fresh Science, a national program sponsored by the Australian Government through the Inspiring Australia initiative.
Media contacts: Dr Robin Beck: robin.beck@unsw.edu.au;  UNSW Science media: Deborah Smith, 0478 492 060, 02 9385 7307, deborah.smith@unsw.edu.au
Twitter Facebook LinkedIn