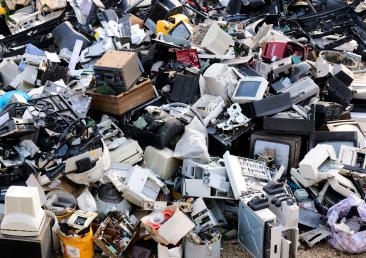 The world is making millions of these devices every day and the longer we delay, the greater the threats to health - Prof Mark Hoffman

It’s a common sight in developing and developed countries alike: piles of electrical and electronic waste such as TVs, computers, mobile phones and toys.

About 40 million tonnes of e-waste is created each year – the world’s fastest growing waste stream, according to a report last year by the International Labour Organization. Of the bulk that’s recycled, around 80% ends up in countries such as India, China, Nigeria and Ghana.

What can’t be extracted and resold is incinerated or discarded in landfill.

One such component is piezoceramics – the unseen, yet powerful, material that allows devices to convert mechanical energy into electrical power and vice versa. The commercial market for piezoceramics was an estimated $US20 billion last year, led by applications in the biomedical, military, semiconductor, robotics and consumer electronics industries.

The material of choice for piezoceramics is lead zirconate titanate (PZT). When PZT is incinerated, lead oxide, a highly toxic substance, is released. Exposure in people can cause serious neurological damage. It’s no coincidence that much of the manufacture and disposal of piezoceramics happens in countries where safety and environmental regulations are weak.

“From a superficial point of view, e-waste is a recycling success story,” says Pro-Vice-Chancellor (Research) Professor Mark Hoffman, who leads a team of materials scientists and engineers in UNSW’s Ferroelectric Materials Research Laboratory. “But that ignores the potential hidden impacts on people and the environment.”

Hoffman and his team are hunting for a viable alternative. “The world is making millions of these devices every day and the longer we delay, the greater the threats to health through direct exposure and downstream environmental pollution,” he says.

The EU has already moved to regulate against leadbased piezoceramics, once a viable alternative is found. Other countries, including some of the biggest electronic manufacturers such as China and Korea, have followed suit.

One alternative is bismuth alkali-based piezoceramics. Attractively lead-free, the downside is their propensity for fatigue and degradation.

Discovering and rectifying the mechanisms behind this decline will be essential to rolling out a prototype for industry testing. Hoffman believes his team is close to such a breakthrough.

Read the full story in Uniken

Download the Uniken app for video, audio and slideshows.